One of the most popular Nepali actresses, Rekha Thapa is known for her sensual dance moves and numerous movie releases every year. She has done more than nintey movies and is usually seen in at least seven movies a year, hence, rare are the Nepalese who do not known her name or face. Popular for controversies of many kinds, most of her movies portray her as a sex symbol. Born on 5 July 1975 in Morang district in eastern Nepal, she also has her own film production house called Rekha Entertainment. 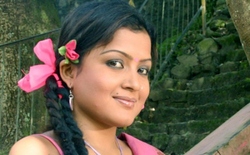 She was one of the top ten finalists in Miss Nepal 1998 beauty pageant. Although she was not crowned as Miss Nepal, it gave her a platform she needed to get into the entertainment (glamour) industry as she signed her first movie two years after she appeared on the Miss Nepal stage.

With her debut movie Hero she established herself as a glamorous actress since then, there has been no looking back. With her numerous news making controversies and large numbers of releases, she has always been on the Nepalese Media circle, one way or other. In November 2009, she was seen dancing with the Maoist chairman Prachanda encircling Durbar Square, the government headquarters, while protesting for Unified Communist Party of Nepal (Maoist). She was also seen kissing the world’s shortest man Khagendra Thapa Magar on December 2009. She was also dragged into scandals of dating well known actors like Rajesh Hamal, Nikhil Upreti and Aryan Sigdel. She was married to one of the successful movie producer Chabi Ojha until 2012 when she got divorce with him. However, she claims not to have been officially married to him, although they were popular as celebrity spouses for about a decade.