Nepali Cyclist Around the World

An ordinary Nepali who got popularity for an extraordinary work, Puskar Shah has become a household name not only in Nepal but also around the world. The person who went around the world in about ten years spreading the message of peace did not become famous because he travelled the world, he became famous for riding more than 220000kms on a bicycle. Yes, indeed!

Nepali cyclist Puskar Shah started his journey from November 1998 and finished it on August 2009 after doing 220000kms of cycling around one hundred and fifty countries. He shares a mixed experience of being mugged in New York to getting kidnapped and lost in the deserts of Mexico to getting a new bicycle in Switzerland as a gift from Sir Edmund Hillary. The hungry nights, sleeping in deserts, jungles without any communication with anyone, the years had been hard on him, still there was a hope and his determination to finish what he had started, not only for his country but for the world, to spread the message of peace around the world. 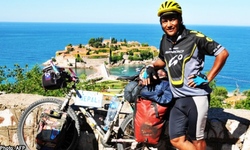 He believes that he was destined to do that. It is amazing and does sound crazy that the day he started his journey, he only had a hundred rupee note (less than $ 1.50) his mother gave to him. A person belonging to a simple farmer family from Makaibari VDC in Dolakha district definitely had some courage to go around all six continents and travel the whole journey on a cycle. He is also a democratic activist and a freedom fighter who got shot during the first popular People’s Movement in 1990. After many sleepless nights and uncertain situation of the country, he desired to spread the message of peace and harmony around the world and this is when he decided to cycle around the world, with his country’s national flag, spreading the message of peace. Many gave him the title of “The Global Peace Ambassador” for his courage and his contributions.

Puskar is an example of determination and courage, who inspires us all to do things that we otherwise hesitate to do with a fear of failure. One thing to learn from his life, ‘if you really desire something, work for it with all your heart and you will definitely taste success’.