The Nepali movie Acharya, directed by Prashant Rasailey, is based on the life of classical/modern signer Bhajan Siromani Bhakta Raj Acharya. It depicts the struggle of the artist to make up to the recording studio of Radio Nepal and his life after his music starts getting recognized.

The character of Acharya is played by Satya Raj Acharya, the musician’s elder son. The movie tells a heart touching story of one of the best singers of Nepal, the harsh reality of his life when he had struggled to get recognition as a signer, the tragedy that left him voiceless. It is more of a biography of the singer. It tells the story of his struggle for getting a chance of recording at Radio Nepal, the only recording studio the country had at that time. How he started his career, what he went through to achieve it and also his life after he was recognized and established as a signer. 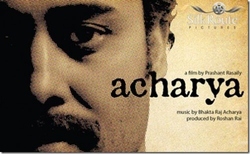 Satya has done justice to the character and has succeeded in staying within the limitation of the plot rather than going overboard like most of the other Kollywood actors. No one could have been able to present the role better than him as he had seen the struggles of his father and no one could know and understand his father better than him. The role of Acharya‘s wife has been performed by Aruna Karki and she, too, has done justice to her character.

The soundtrack of the movie is perfectly fitting as none of it seems to feel unnecessary. There are some flaws in screenplay and the flow of the movie with the biggest drawback being the protagonist crying in the middle of the field that seems no way to be in accordance but otherwise, the entire crew has done a good job.