‘Lanka’, the Nepali movie directed by Shyam Bhattarai casts Rekha Thapa in the lead role with Kishor Khattiwada, Nandu Srivastav in main role that presents the clash between good and evil a regular masala of the old films.

Lanka presents a story of a person named Babubhai (Nandu Srivastav), the president of Terai Democratic Party, with a great support from leaders ruling the country. With his political powers, he creates ‘Lanka’ a place where illegal activities are carried out. The police in charge of that area Deepak Pandey (Dhruba Koirala) bought by his money Bhabubhai due to which he runs his illegal business without having any fear and then suddenly a new police officer Satya (Kishor Khatiwada) appears who decides to fight against the illegal activities of Babubhai. A journalist named Bhasker (Binod Pandey) joins him to uproot Bhabubhai‘s Lanka but with the help of police in charge, Babubhai’s brother Nandubhai becomes successful to remove him by a bullet in his chest. After Satay’s murder, his wife Saraswati Pandey joins the police force and moves her steps against illegal Lanka. One must watch the movie to know whether Saraswati becomes successful in taking the revenge against Babubhai and destroying Lanka, which is pretty obvious. 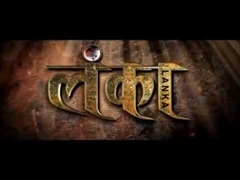 ‘Lanka’ represents an old story, nothing new which presents the female oriented character. Although the first part of the film is not so bad, second part is much hurried and many parts at the end remains disconnected. The action in the film is appreciable but it seems that he action director was in a hurry to end the movie which was a bit of negligence from them. The movie is tolerable though, yet difficult for the one willing to watch the whole movie. Rekha, a talented actress in Kollywood industry, has failed to maintain her talent through this movie as she totally failed to act like a police officer. Kishor and Binod Pandey has done justice to their acting along with appreciable actions whereas other actors’ work was relatively average with the impressive background, people had expected a lost but Lanka failed to meet their expectation.

Lanka mainly based upon the action can be accepted by action lovers but dance, acting and jerky confusing story doesn’t create a good film viewing experience.