Bairagi Kainla is one of the most renowned poets of Nepal. One who had also been responsible for adding a new (third) dimension to the Nepali literature, he had actively participated in the literary struggle Tesro Ayam (third dimension) movement of Nepal. He had searched the unexplored realms of together with Ishwor Ballav and Indra Bahadur Rai during the early 1960s. He believes that creativity needs to explore the unknown.

Born to a big family in the village of Pouwa Sartap in Panchthar district, Bairagi Kainla was born on the same year his grandfather Man Prasad (Harkagoli) died. He grew up with eight brothers and six sisters as his father, second among his four siblings married six times. He remembers always having someone around as the best part of growing up while the sad part of big family was that the women in the family had to wake up around four o’clock in the morning and start their daily chores. His father, as he recalls was among the first of the Limbus to emphasize education and he had sent his children far away from home for further studies.

He had expressed his desire to go to Ilam with his brothers when he was still a kid an once, at the age of about seven or eight years old, he had escaped and raw all the way to Raksyshey where he met an old Tamang his family had sent to go after him. He, however, refused to return and then went to Ilam and settled down with his brothers. He started his schooling in 1947. He went to Darjeeling in 1954 and joined grade eight at a government school and stayed in hostel.

His named was printed in a Bal Mandal, citation column for children belonging to Yugabani magazine which marked the beginning of his career in Nepali literature. He studied the biography and works of many literaturers in Nepal and India and started to get involved in literary activities. During the time, hand written magazines were popular as printing was too costly. He and his friends published a lot of their work in them. He had also written much poetry and was inspired to start something new when he was living there.

He met with Ishwor Ballav and Indra Bahadur Rai there and the three of them got together and started organizing kothe gostis (room meetings) to discuss poetry and writing. They also organized dictation competitions at the district level on the Ramayana verses and brought out a fortnightly literary journal Ful, Pat, Patkar. The magazine carried new types of writing in it and gradually several well-known writers of Nepal and Darjeeling also started to attend the gostis. Also the present day’s finest critics Ganesh Bahadur Parsai had attend the meeting and had briefed them about the movement started by Prayog Vadi regarding experimentation and reason in Hindi literature. It is what encouraged them further to go beyond the bounds of traditional means for the development of Nepali literature. With a belief that the traditional way of thinking, writing and the use of language cannot help to brigng a subject alive, they started the new concept, the third dimension in writing. This was the background for the Tesro Ayam movement that they started. They published the Tesro Ayam journal in 1963 and most of the time, he wrote the poetry for it.

He initially studied science in college, however, unsatisfied with his performance, he changed his faculty to arts and was preparing for his Bachelors of Arts finals when he fell sick. Although he joined North Bengal University to resume his studies, he fell sick again during the examination. He went back home in 1964 for his vacation and stayed there and in 1967 his friends filled up examination forms for him at Tribhuvan University. However, he was settled down to the lifestyle at home by then and was content to self study. Since he was interested in re-learning the language of his people, he in later years, brought out several books on the mundhum, oral traditions of the Limbus. He made progress and during his research, for following six years, he realized that he wanted to preserve the Limbu culture. So, he formed a society that would support the research, translation and publishing of the Limbu language and when he came to Kathmandu, he realized that there were many other languages that needed preservation and documentation.

He began to live in Jhapa since 1977 and was involved in the activities of the Nepali Congress Party during the national referendum in 1979. He served the Panchthar District Committee as Vice President of the underground group to carry out their work although he was living in Jhapa. He became a member of the Nepali Congress Committee of Jhapa in 1987, however, he no longer holds the position 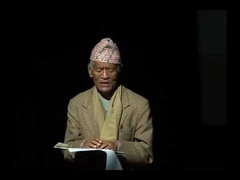 He was nominated member of the Royal Nepal Academy in 1990 and later in 1994, he was re-nominated and has worked with the academy for almost eight and a half years. His focus was to promote the ethnic languages that were facing extinction and he had compiled a Limbu-Nepali-English dictionary that has more than 10,000 head words. He also translated the Limbu mundhum and published two books on the Tongsing (three night oral ritual for accidental death).

His father had also published a publication on Limbu language in Devanagiri which was probably the first Limbu lyrical poetry to be published. Bairagi Kainla had translated it later to Nepali.

He states that unlike what most of the people think, a life of a writer is different from their creations, there are hardships and struggles not glamorous as their works portray. If they are successful, they receive recognition which is a reward for them. He spends more time in studying and translating the Limbu language because he believes that there are many poets writing in Nepali but very few are into preserving an indigenous language. He feels satisfied by spending time in contributing to something that the future generations will learn about one day.