Tea is one of the most popular drinks consumed worldwide. Not only in the places with cold climates but also the places that, sometimes, are extremely hot, drinking tea is a popular habit and Nepal is not an exception.

Tea drinking culture has been started in Nepal a very long time ago and it has growing up every day with more and more people indulging themselves in the drink. If is one of the best ways to beat chills, then it is also one of the good ways to start conversations. Most of the people start and end their conversation holding a cup of tea in their hands.

It is also one of the most commonly offered drinks in Nepali households. As soon as a guest comes to a house, they are offered a cup of tea, it is a common gesture. Not only milk tea or black tea but recently, green teas have also been popular among the health conscious Nepalese.

The procedure for making tea might vary from person to person but the ingredients used, more or less, are same when it comes to making a regular tea. Here is one of the ways of making Nepali tea, known as Nepali Spiced Chiya. 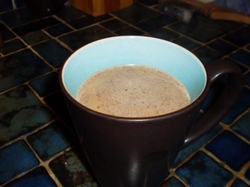 First of all, take a small cooking pot and pout milk into it. Then, add all the ingredients and set heat to low. Let the mixture boil and let it simmer for about five minutes. After that, strain tea into a cup with tea strainer and serve hot.