Full Stop is an adult certified thriller movie released on august 31, 2012. The movie with the names such as Binita Baral and Sabin Shrestha as the leading actors is directed by Kamal Krishna Paudel. The story of the movie is believed to be full of suspense and thriller.

The story begins when Abhi (Sabin Shrestha) helps two of his friends to get married because of which all his friends leaves for Manakamana. They stay in a resort to enjoy and have fun after the marriage. Among the friends who are there, Prachi (Binita Baral) is in love with Abhi. The next day, the newly married couple vanishes from resort making their friends start to search for them. In this process, other members of their group also get killed one by one. Where did the married couple go? Who killed Abhi’s other friends and why? The answer to these mysterious questions can only be known if one watches the movie. 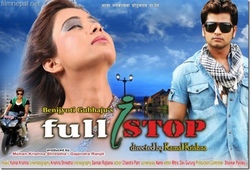 The movie portrays both positive and negative points. Binita Baral seems to be fair in her acting, Sabin Shrestha‘s acting might feel to have done injustice to his character. Although the movie has been successful to keep up the suspense for its first half, its second half is rather uninteresting. Also, what the movie really wants to show to its audience is quiet unknown and although the movie is categorized as a thriller, there seems to be lack of thrill in the entire movie. Also, the weakness in part of the director can be sensed and if only he had been more careful about some details, the movie might actually have been watchable.

The entire story of the movie is copied from the Bollywood movie Kuch To Hai, apart from some additional vulgar jokes and intimate scenes. The Nepali thriller Full Stop proves to be just another average movie copied directly from a Bollywood movie and offered to the Nepali audience. It totally fails to meet the expectations of the audience and lacks far behind in entertaining them.