Parijat, the author of the Blue Mimosa

Born in 1937 in the hill station of Darjeeling, India, Parijat was the first woman to open up voice of Nepalese women to the outer world. Although her real name was Bishnu Kumari Waiba, she is best known by her pen name Parijat, the writer of the novel Shiris ko Phool (the Blue Mimosa). She was highly influenced by the Nepali literature during her childhood period as Darjeeling was the major centre of Nepali language, culture and literature. She has played a significant role in strengthening the Nepali literature. 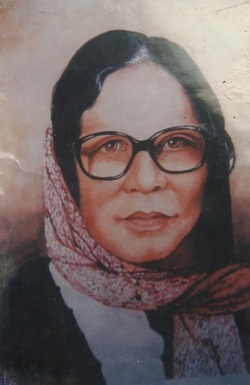 Parijat completed part of her schooling in Darjeeling and in 1954, she came to Kathmandu and joined Padma Kanya School. She completed her Bachelor of Arts degree but was struck by paralysis at an early age of 26, after which she was depended on her sister for rest of her life.

Her first poem was published by Dharti. She published three poetry collections, Akansha, Parijat ka Kavita and Baisalu Bartaman. Maile Najanmaeko Choro (the son I did not give birth to) was her first short story. She is best known for her novels and among the ten novels she penned, Siris ko Phool (the Blue Mimosa) became a masterpiece of Nepali literature. She received the Madan Puraskar in 1965 for the novel and was also awarded the Sarwashrestha Pandulipi Puraskar, Gandaki Basunahara Puraskar and Bridabrit.

During her lifetime, she served as an elected member of the Tribhuwan University and a part of Ralfa Literature Movement. She was also one of the founding members of the Pragati Sil Lekhan Sangh and she also worked for the Akhil Nepal Mahila Manch, Bandi Sahayata Niyog and Nepal Manav Adhikar Sangathan.

She remained unmarried and devoted her life to strengthening the Nepali literature and other social causes. Her novel the Blue Mimosa has been included in syllables in various American Universities. Some of her works dealt with the issue of social injustice against women while other are based on love, emotion, nationalism, society, etc. Even though Parijat was physically weak, she was strong mentally. Her works had great impact on the readers that dwelled into their own emotional voices. Death might have taken her from this world in 1993 but she still remains as a strong literary figure reaching out to the hearts of readers through her literary works.