Located in the south central lowland Terai of Nepal covering the area of 499km2 is the Parsa Wildlife Reserve. The largest wildlife reserve with the pristine sub-tropical jungle was once used as a vacation site by the Rana Rulers of the country. It was declared as a wildlife reserve in the year 1984 with the aim of preserving the wild animals, especially Asian elephant and variety of other fauna.

The tropical and sub-tropical forests of the reserve mainly consist of Sal forests (about 90% of the reserve’s vegetation). The riverine forests consist of floral species like Khair and Silk cotton tree. The reserve accommodates various endangered species of wild animals like Asian elephant, Royal Bengal Tiger, Sloth bear and leopard along with Blue bull, Sambar, Chital, Hog deer, Barking deer, Langur, striped hyena, jungle cat and Palm civet. Along with around 500 species of birds living in the reserve and also the most endangered bird found only in some forests i.e. Giant hornbill, the reserve is famous for the reptiles and different types of snakes. 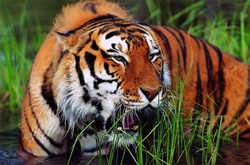 A small guest house with four rooms is present at the headquarters for accommodation and a teahouse serves the guests with tea, snacks and Nepali food. Although the two big towns, Hetauda and Birgung are just about an hour drive away, it is better to take first-aid kit containing medicines for intestinal problems. There is a view tower near the headquarters that provide great views of many birds, deer and leopard along with the wild elephants, making it great for bird watching. Kailas Bhata is a place of religious significance and is atop a hill that houses two small temples of Dugdeshwor Mahadev and Parvati. Devotees visit the place as a part of pilgrimage in order to pay homage to the Hindu god Shiva and goddess Parvati. The view of the lush green forests from atop the hill is splendid. Amlekhgunj in Bara district houses an elephant camp. The best way to observe the wildlife in its natural habitat is jungle safaris that could be arranged from the reserve headquarters.

Parsa Wildlife Reserve is easily accessible from Kathmandu–Hetauda–Birgunj highway. 6 to 7 hours bus ride from Kathmandu could take you to the reserve and also a 20 minutes flight to Simara is available which takes additional 15 minutes bus ride to reach the reserve headquarters.