A Darjeeling-based singer and actor who got an instant hit after winning the Indian musical show, Indian Idol Season 3 in 2007, Prashant Tamang is has become a household name in Nepal as well as India. Formerly an Indian police force personnel, his singing skills and talents and love and support from his fellow Indian and Nepali well-wishers not only made him the first police force person to enter into the finals of the competition but also win the title.

Born in Darjeeling in West Bengal, he spent most of his early life in his birthplace. He studied at St. Robert’s School which he left to join Kolkata Police as a constable (in his father’s place) after the death of his father. He sang for the police orchestra while he was in the force. It was then that his friends and his seniors encouraged him to participate in the musical show. While in the show, he never got to the bottom three or four which was considered as the danger zone for the contestants. He not only got to the top three but won his counterpart Amit Paul with around ten times more votes. 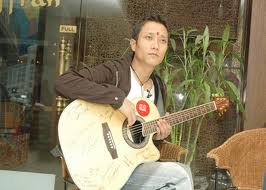 He got a celebrity status in Darjeeling, Sikkim and Nepal after he entered into the Indian Idol contest. He received supports from the Nepalese all around the world and many people and organizations also generated funds for SMS voting in his support. He was also considered as “Pahad ko Gaurav” which means the “pride of the hills”. Although he had received no formal trainings in singing prior to entering the contest, it is the result of his hard work and dedication which brought him the title he received.

Besides the contract with the Indian Idol organizers, he has released two successful albums Dhanyavad (Thank You) in 2007 and Namaste in 2008. He has also done playback singing and has acted in three Nepali movies, that are, Gorkha Paltan (2010), Angalo Yo Maya Ko (2011) and Kina Maya Ma (2011). On 16th February 2011 in Nagaland, India, he married his girlfriend Geeta Thapa Magar, a flight attendant and also the actress of his first movie Gorkha Paltan. It is said that they fell in love during the shooting of the movie.

Prashant lives in Darjeeling and is actively involved in music industry keeping himself busy with stage performances and live concerts in various parts of Nepal and India.