Prayer Wheels, the most revered item by buddhists

A prayer wheel is a hollow metal cylinder, often beautifully embossed, mounted on a rod handle and containing a tightly wound scroll printed with a mantra. Prayer wheels are used primarily by the Buddhists of Tibet and Nepal, where hand-held prayer wheels are carried by pilgrims and other devotees. The prayer wheels are turned during devotional activities.

According to Tibetan-Buddhism belief, spinning a prayer wheel is just as effective as reciting the sacred texts aloud. Hence, the prayer wheels are useful for illiterate members of the Buddhist community, since they will have “read” the prayers by turning the wheel. For many Buddhists, the prayer wheel also represents the Wheel of the Law set in motion by the Buddha.

The prayer wheels come in many sizes: they may be small and attached to a stick, and spun around by hand; or they may be medium-sized and set up at monasteries or temples. Some others are very large and continuously spun by a water mill. Prayer wheels at monasteries and temples are located at the gates of the property, and devotees spin the wheels before passing through the gates.

The external cylinder of a prayer wheel is made out of metal, usually gilded bronze. The wheel is supported on a handle or axis made of wood or a precious metal. On the outside of the cylinder are inscriptions in Sanskrit or Tibetan. Most often, it is Om Mani Padme Hum and auspicious Buddhist symbols. This outer part is removable to allow for the insertion of the sacred text into the cylinder. The ext is often printed on paper or animal skin and then inserted. The uppermost point of the prayer wheel forms the shape of a lotus bud. 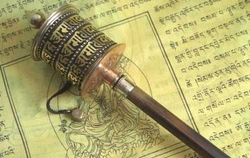 The practice of turning the prayer wheel, or even wearing or having in one’s home, is said to be of immeasurable benefit. The wheels are known for their ability to quickly harmonize the environment, increase compassion, encourage a peaceful state of mind, and assist practitioners on their journeys to enlightenment. As such, the prayer wheel practice is an extremely quick, simple and profound method for developing compassion and wisdom.