First President of the Loktantrik Nepal

Born on 4 February 1948, Dr Ram Baran Yadav is the first ever President that Nepal has (after being declared a Loktantrik country). Born as the fourth son of Thani and Ramrita Yadav, Dr Yadav has come a long way from being born in the small village of Sapahi in Dhanusha district to becoming the first ever President of Nepal following his victory in the presidential run-off in the country’s powerful assembly.

Dr Yadav received his schooling and higher education in Kathmandu before he went to India to study medicine. He completed his MBBS from Calcutta Medical College in India and then went to the Post Graduate Institute of Medical Research in Chandigarh of India to receive his MD. He was always involved in politics, one way or the other, although he was a successful doctor.

His political career began when he led anti-government protests as a student leader in 1960, following the outlawing of political parties by the then king Mahendra. In every pro-democracy movement of the country in the past 30 years, he always was at the front. He served as the member of Central Working Committee for 15 years in the Nepali Congress Party, as a member of Parliamentary Board and also the member of Discipline Committee of the Party. He was also the Health Minister in the 1990s for two terms and was the general secretary of the Nepali Congress representing the ethnic Madhesi community of southern Nepal before being elected as a President. 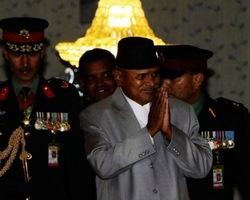 He was selected as the first President of Nepal in a second round of voting on 21 July, 2008 where he received 308 votes out of the 590 votes cast in the Constituent Assembly defeating his opponent Ram Raja Prasad Singh. He was sworn in as a President on 23 July, 2008 at the presidential palace, Shital Niwas by Chief Justice Kedar Prasad Giri.

The sixty four year old President was married to the late Julekha Yadav and has two sons and a daughter. He had been in the team of doctors who underwent treatment to Nepal’ s first elected Prime Minister B. P. Koirala and was inspired by the social democratic ideology of Late B. P. Koirala to come into the political field. He was a private practitioner of medicine in rural Nepal before he got involved into politics.

Belonging to the marginalized Madhesi community, election of Yadav as a President was a landmark in the political history of the country and not only that, Dr Ram Baran Yadav being the first President of Loktantrik Nepal himself is a part of the history.