Senior Standing Committee Member and Vice President of Unified Communist Party of Nepal (Maoist), Dr Baburam Bhattarai is also the 36th Prime Minister of Nepal. Born on 18 June 1954, Dr Bhattarai was elected to the Constituent Assembly form Gorkha in 2008 and became the Finance Minister in the cabinet formed after the election. His party had started a decade long revolutionary People’s War in Nepal in 1996 that ended after the overthrown of the monarchy and establishment of Republic in Nepal.

Belonging to a low-middle class peasant family, this revolutionary leader hailing from the small of Belbas in Khopland VDC of Gorkha has come up a long road. He completed his secondary school education from Amar Jyoti High School in Luintel, Gorkha and he had topped the SLC examinations of 1970 in Nepal. He completed his high school education from Amrit Science College and here as well, he topped the board. A bright student from the beginning, Dr Bhattarai studied Bachelor of Architecture in 1977 from Chandigarh under the Colombo plan scholarship. This was the time when he became the founding President of All India Nepalese Student’s Association which paved his way towards other academic field besides architecture. He went to the Delhi School of Planning and Architecture for an M.Tech degree. He completed his PhD from Jawaharlal Nehru University (New Delhi) in 1986 and his PhD thesis was later published as a book named ‘The Nature of Underdevelopment and Regional Structure of Nepal- A Marxist Analysis’. 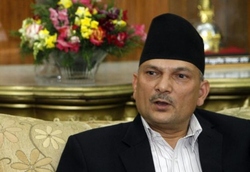 He is married to a fellow Maoist leader Hisila Yami and their only daughter Manushi is also involved in politics as a student leader. He has contributed numerous published works including his PhD thesis which was published as a book by Adroit Publishers, New Delhi in the year 2003. His other works include Political Economic Rationale of People’s War in Nepal (Utprerak Publications, Kathmandu, 1998) and Nepal! krantika adharharu (in Nepali, published by Janadisha Publications, Kathmandu, 2004). His books usually have great impact on those Nepalese living in Nepal as well as abroad who share his political beliefs. ‘Let’s Give No Legitimacy to the Beneficiaries of the New Kot Massacre’ written in the aftermath of Palace Massacre of 2001 was his one of the most popular and well read newspaper articles.

After spending such a long time underground, the Maoists have come to the mainstream politics in Nepal and are the ruling party in the country with Dr Baburam Bhattarai as the Prime Minister. Although some changes for better took place in Nepal during first few months of his rule, disappointment swept through the people of Nepal when the changes remained only in the surface and he proved himself no different than the other leaders, or we could say, Prime Ministers!