How would you like to see a 65-feet tall bulky chariot being hauled through the narrowest of streets in Patan?

Yes, that is what happens in Kathmandu every 12 years on the occasion of Rato Machhendra Nath Jatra. Every 12 years, impassioned devotees pull the chariot on a month long journey through Kathmandu valley. The chariot teeters between the crowd, among the devotees and the frenzy spectators. 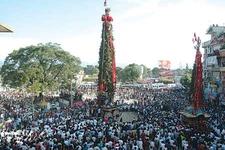 The Rato Machhendra Nath Jatra is one of the oldest festivals celebrated in the country. History has it that before the Kathmandu Valley became a purely commercial hub; it was an agricultural land, and the farmers depended upon the rainy monsoon for important rain crops. But farmers were in a plight when no rain came that year, and the year before that. Priests were called for, and for days, they studied the stars to see what was wrong.  Finally, they saw the problem: the Rain God was angry, and he needed to be pleased.

Farmers gathered to work. They were to build the tallest chariot ever for this God, and drive him round town so that everyone would see him. Aryas, the people from India were brought to build the chariot.  The wood was ordered specially from the Terai region. After many pujas, sacrifices and sanctifications was this chariot ready to be pulled around town. And so began the highly trumpeted Jatra of Rato Machhendranath. 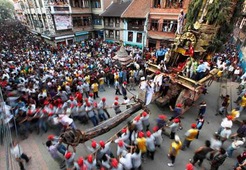 On the first day of the bright fortnight of Baishak, the first month of Nepali New Year, the chariot of the ‘Rain-God’ is pulled.  As Lord Macchendranath, his chariot and its four wheels receive rice and vermillion powder, the farmers in the valley are left with the hope that the Rain God will now shower rain.