The few nomadic forest tribes left on the planet struggle to protect their traditional way of life in balance with nature and their right to roam in the forests they depend on. One among such tribes is the Rautes, the last remaining nomadic people in Nepal.

The Rautes are mostly found in the forested areas of Jajarkot and Dang. The people are generally short and stocky. They are dark skinned with Australoid-like features. They speak a Tibeto-Burman language called Khamchi but generally tend to converse in Nepali. 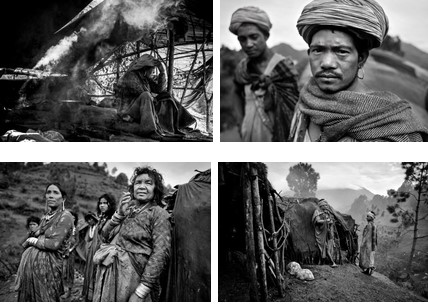 The nomadic Raute tribes have not changed their rigid way of life for decades. And they do not want any changes. The hunt for monkeys is an important part of Raute life, and their traditional hunting technique is spectacular. When a group of monkeys are spotted in the jungle, they quickly go to the place. Then, they pray before they hunt. To trap the monkeys, they put nets on the ground under the trees where the monkeys dwell and surround the area. The Rautes make a loud sound to scare the monkeys, who leave their trees and get caught in the nets on the ground. Hunting takes about one third of their total time. Other male activities are the production of the wood utensils which they barter in the neighboring villages in exchange for food grains. They make wooden chests, trays and bowls. The Rautes just cut a part of the tree, and leave the rest of it alive.

They collect their favourite domesticated fruits from the surrounding villages. The women spend quite some time gathering 29 wild species of fruits and 10 wild vegetables, that these forest people depend on. Depending on the location and available resources, they stay at one place between one week and one month before they leave. Upon departing they set fire to their huts ( made of out of leafs, branches and pieces of old clothes that melt with the dense semi tropical jungle), burning them to the ground. But they never set fire to the jungle itself.  As such, the region they traverse in their wanderings spreads from the Siwalik Hills in the south to the Himalayan hills in the north.

The life of these nomads is governed by strong taboos and to challenge them would call on the wrath of their forest gods. Allowing counting of the members of the tribe, inviting strangers along for the monkey hunt or give access to the inner area of the camp are all covered by the taboos. These people do not trust strangers, and their children and women are strictly instructed to avoid contact. Also, strangers are not allowed within their camp. 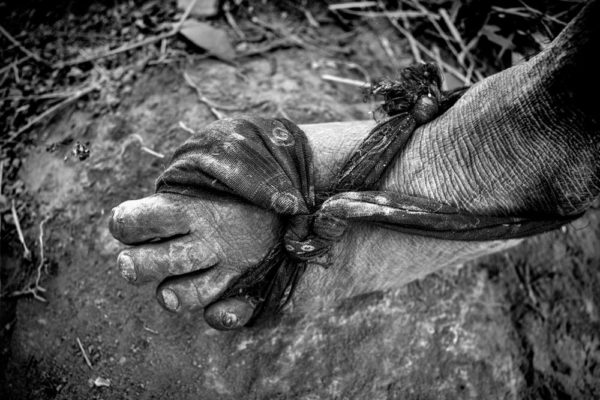 The nomadic life in the jungle is a hard life. Infections are extensive, especially in connection with their hard work making wood handicraft, which put a lot of strain on their hand-joint. The kids suffer from parasite worms, causing inflated stomachs. Only a few of the kids survive their first year in the jungle. The people do not have knowledge on medicinal plants.

The Rautes live a life that they have practiced for more than 900 years. Now there are only about 130 nomadic Rautes left. They are on the brink of extinction and have made their last stand in the mid-west forested hill-region of Nepal – a stand against acute deforestation, influence of modern civilization and depletion of the natural resources they depend on. If the Rautes succumb, the modern world will have lost one more source of knowledge that could help us rediscover our natural roots and a way of life in ecological balance with the endangered forests of the planet.