Located in Jawalakhel down the alley behind the Standard Chartered Bank is Red Dingo, a relatively new establishment. Operated by an Australian couple, the name of the restaurant has left many people confused. As dingos are a popular variety of ‘boot’ in Nepal, the people coming here often confused it with a shoe shop. However, dingo as in ‘Red Dingo’ is a common breed of dog in Australia and the couple had decided to keep the name as they wanted some kind of connection to their home land.

Opening the restaurant was their long cherished dream and also the fact that a lot of foreigners were often confused about finding proper eateries led them to open up the restaurant. The restaurant has earthy ambience created by careful selection of colors, furniture and music which relaxes you immediately. The subdued red, brown and white colors decorate the interior and the smell, taste and the feel of the place is quite different than most of the restaurant around town. 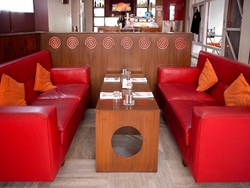 The menu offered here gives the feel of being at home to most of the foreigners and they do not mind if someone finds the food out of their taste as they are not in business for competition with other restaurants. Shirley, who is an avid collector of recipes likes to try new cuisines and also plans to offer seasonal menu, changing what is on offer four times a year. And to ensure the food of the taste stays exactly the same, she stays around when the food is being prepared. She has also hired an experienced chef who works at Hotel Everest. The lack of ingredients also causes problems sometimes.

The main course is a selection of meat pie, hamburger, crunchy crust fish, stuffed chicken breast, steak, etc. or you could also make your own from the list. They also have a variety of hot and cold beverages. The restaurant provides relief to the westerners living in Kathmandu from the otherwise heavily fried, spicy food of Nepal and also many locals has grown accustomed to the standard and quality food offered at Red Dingo. So, if you want to experience of eating western food at comparatively cheaper price, Red Dingo might be the place you have been looking for.