Reema Gurung Hoda is not only the daughter of a renowned musician Prakash Gurung but also a popular and well known singer herself. She has sung numerous songs for movies and contributed on various albums of other fellow artists although she has released only one album of hers, named Praheenir, few years back. Being a mother of a son, her time is mostly occupied caring for him, looking after home and she rarely has time for her first passion, that is, music. Having fallen in love with and married to Nirmal Hoda, the proprietor of Santana Records, she accepts that the support of her husband is one of the main reasons she has been able to give continuity to singing. 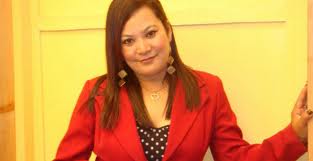 She completed her schooling from Holy Garden Boarding School, Intermediate from People’s Campus and her Bachelors from Tri Chandra College. She has recently completed her master’s degree. In the year 2050 BS, after completing her SLC exams, she gave and passed her voice test from Radio Nepal after that she started polishing her voice. I took her twelve years to come up with her first album Praheenir and one of the songs, Maile Jannina Ki Kaso, from the album was recorded five years before the release of the album. She is grateful to her father Prakash Gurung, musicians Deep Shrestha, Deepak Jangam, Sachin Singh, Raju Singh, Ashok Rai and Gagan Gurung for believing and having faith on her.

Although she has sung numerous songs of almost every genre, she feels that soothing and Adhunik type songs and the sentimental type songs suit her. In today’s world, although the people ‘watch’ the songs rather than listen to them, she still believes that only a good song and music would do justice to it rather than simply a nice video. Initially involved in commercial songs, after marriage, she has become more choosey and selects only quality songs. Besides singing, Reema Gurung Hoda likes to spend her free time reading books and novels, cooking and listening to music.