An integral part of the Hindu religion and a sacred item found in most of the Nepali household with the Hindu religious inclination, Rudraksha literally means ‘what is born out of Lord Shiva’s eyes’. Skanda Purana mentions that hearing or reading the glory of Rudraksha can drive away the sins of anybody and also wearing it would get rid of all the bad deeds, no matter whoever s/he is.

Rudraksha, or specifically, Rudraksha mala (garland) is found in all the Hindu households in Nepal as it is considered as one of the most sacred items and are used for japas (chanting mantras) while worshipping. According to the legends, the three demons, Tripurasura caused great chaos on earth and troubled by this, the gods summoned Lord Shiva pleading protection against the demons. Lord Shiva, then, opening his half closed eyes from meditation burnt down the forts of the demons. However, the demons being sincere devotee of Shiva, remained alive and it is believed that a tear rolled out of his eye when burning the Tripuram, the demon’s forts. This single drop of tear from his eye is said to have grown into a Rudraksha tree. 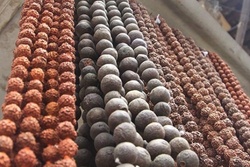 The tree, known as blueberry tree, is found in the tropical and sub-tropical areas at an altitude of 2,000 m above the sea level and most of the houses in Terai region of Nepal also have a tree in their garden. The tree bears green-colored fruit with hard seeds during the month of June which is used as Rudraksha bead. These round and grooved seeds are considered sacred and people wear garland or use one bead in a gold or silver chain to wear around their neck. The grooves are referred to as mukh or faces of the Rudraksha and a seed can have faces ranging from one to as many as 108 and among them, the one-faced Rudraksha, known as Ek Mukhi Rudraksha is considered the ‘King of all Mukhis‘ and is the rarest and religiously most important type. It is also said that this Rudraksha helps to control physical dysfunction of the right eye, headache, ear ailments as well as depression. The seeds with 22 to 108 faces are considered almost extinct while those with two to twenty one faces are the most common. Among all of them, the paanch mukhi, five faces, Rudrakshas are the most commonly found.

Its religious importance is based on the fact that it was born out of tear from Lord Shiva’s eyes and also that in most of the pictures and images of Lord Shiva, he is seen donning Rudraksha mala in his neck and arms. Also, Rudra means ‘the fiercest form of Lord Shiva’ and Aksha means ‘eyes’, adding up to its religious value even more.