Culturally rich Sankhu has always been tourist friendly, especially after 1951s when the locals were encouraged to share thier culture with the tourists through traditional dances, craft production, story/bhajan/hymn and other activities. Also, a trust has been developed there which has helped the community to become more organized and has gained some power to bargain and negotiate a price for the services it provides to the tourists.

Also known as the Sankhu Bazaar of thousand houses, the Sankhu bazaar has its own identity and is highly a Newari habitation. The bazaar consists of places like Suntol, Puklachhi and Bajrayogini VDCs and it is also said that this is the first city built in the Kathmandu valley. Situated at the eastern tip of Kathmandu at the distance of about 17 km, the historical bazaar of Sankhu was built more than 3000 years ago. Sankhu served as a crossroad for Tibet or Lhasa for business purpose before 1960 and the name Samkhu bazaar has a record of being different in different periods of time. 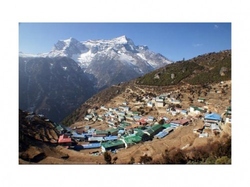 This bazaar, according to the Vamshabali, is said to have been ruled by Manichud Maharaj in the name of Shanketu Nagar and in Kaligat Sambat 1801, this bazaar was built by uniting seven different villages. Also, the folk tales describes that the bazaar was ruled by King Shankh Dev and the story of Swasthani mentions it being ruled by King Nawa Raj in the name of Lawanya Desh. It is popular by two names, Sakhwa (in Newari) and Sankhu (in Nepali) in the present context and there are many historically significant temples, statues, Shila Patra, guthis and festival situated and practiced in Sankhu.

Built as the first bazaar in Nepal with facilities of roads, sub roads, sewerage and public building like ‘satal’, ‘paati’ and ‘dhoka’, Sankhu bazaar had nine gates for the entrance into the bazaar, however, only five exists today. The names of four gates are named as Bhau Dhoka (also known as bride gate as this door was used when a person married a girl out of the Sankhu bazaar), Sanga Dhoka (also known as daughter gate, this gate was used to send off the daughters of Sankhu bazaar after they got married to residents outside of it), Dhunla Dhoka (Dwaya gate is the other name for this gate which is used for the entrance of the ritual processions) and Mahadev Dhoka (also known as the Shiva Gate, this gate lies in  Bajrayogini, in Salka tole from where dead bodies were taken out for the funeral rites).

The place that served as separate kingdom before Malla period, Sakhu bazaar was under the Bhaktapur kingdom for sometime during the Malla period. Some of the must-see places in Sankhu are the Layaku Durbar Square, Bajrayogini temple, Sali River, courtyards such as Narayan Chowk, Malli Chowk, Dware Chowk and Nasal Chowk. During the Bajrayogini jatra, the sword of king of Nepal is brought from Hanuman Dhoka Palace to here ad kept on the throne. The people residing here are mostly Newars, hence, there is their dominance over the culture, language and tradition. Other communities and ethnic groups, however, resides in the surrounding areas of Sankhu.