Sano Sansar is a romantic comedy directed by Alok Nembang. Although the movie highly inspired by the Korean flick “My Sassy Girl” and an English movie “You’ve Got Mail”, its presentation and the acting by the star casts is good. It gives a break to the Nepali movie audience from the same old typical Nepali movies. 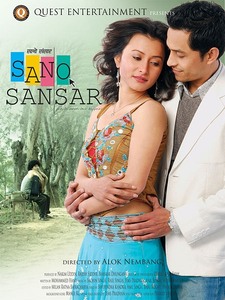 The New Generation Nepali High Definition movie in 2008, under the banner of Quest Entertainment, Sano Sansar was a debut for the theatre artist Mahesh Sakya (Karma) and Nepali model Namrata Shrestha and the actor Jiwan Luitel. It also stars Neer Shah as a police inspector and Reetu’s father. The cast also includes model and actor Binay Shrestha.

It is a story about the young generations in Nepal. A recent college graduate Ravi doesn’t know what he wants in life, the girl Reetu knows what she doesn’t want, the sure-headed fellow Suraj who knows exactly what he wants in life and Manoj Sizapti (aka Siza) who wants what every guy wants. The story revolves around these characters and the ups and downs in their life. Ravi and Ritu chat online with each other every night and gradually fall for each other. However, they hate each other in person. Ravi came to know about the true identity of Ritu long before her, but could never reveal it. The movie is wonderful combination of presentation, dialogue and songs. It deals with the story of the virtual world of internet where many people have fallen in love with the person they have never met or even seen in person.

The movie explains that the person you just crossed on the road, or the person you had an argument in your real life might be the person you love in the virtual world. They might be the love of your life and because of the misunderstanding in your first meeting, you might start to hate them without knowing them completely. The world is small and you meet everyone, you know everyone even though you think you have not.

Sano Sansar is a good movie for those who want the taste of a good Nepali romantic-comedy without the typical dhintang dhintang rhythms in them.