Sarangi is a traditional Nepali musical instrument that has four strings unlike the Indian Sarangi. Traditionally, people from the Gandharva (singers) community used Sarangi in their Gaine songs. The spell-bounding voice of the Sarangi, that is often believed to resemble the sorrowful human voice, was so tempting that it has attracted many people. It is widely used in the folk songs of Nepal. 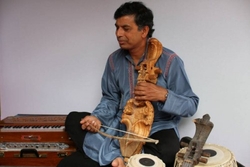 In past when there were no forms of communication and information, the Gandharvas were responsible for informing people with their songs. They sang the songs of any events happening around or any message a family member had sent to other and they were paid for their efforts. They used Sarangi when they were singing. The Sarangi is believed to be originated from the Central Hilly Regions, mainly the Gandaki region as it was the home for majority of Gandharvas.

The neck and the body of the Sarangi is made out of a light wood, locally known as Khirro. The body is carved into a hollow frame with two openings among which the lower is covered up with dried sheep-skin. Traditionally, the fine nerves from sheep’s intestine were woven to get the string and the bow string of the Sarangi was originally made out of the horse-tail hair. However, these days, those strings are replaced by nylon strings. The instrument is placed vertically on the left knee and is suspended by a chord around the left shoulder.

Sarangi is most commonly used in the folk songs, especially those which express hurt and tragedy as it is believed that the sound of a Sarangi resembles the pain human voice.