Sea buckthorn juice made in Nepal

Manufactured locally, Sea buckthorn juice has been popular among some people of Nepal for past few years, however, most of the people are unaware of it. Not only of the juice but also the fruit itself is new to them. Growing mainly in dry sandy areas, Sea buckthorn fruit has been growing in the high altitude region of Nepal for centuries now.

The fruit was used by the Ayurvedic doctors for medicinal purposes while the villagers used its wood for fire a decade earlier. They, however, learned to make juice from the fruit soon enough and the Women Development Committee based there took the responsibility of commercially manufacturing the sea buckthorn juice. And now, the committee of eleven members takes care of everything from hygiene check of the fruit collectors to labeling the juice bottles. 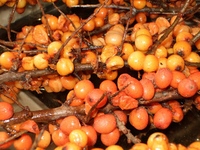 As the fruit ripens during the final week of August and the commencing week of September, the juice is made then, only once a year. One female member from each house in the village goes to pluck the fruit and each kilogram collected by them is bought for Rs 100-150. This also gave a new source of income to those who survived through their subsistence farming. This also helped the women to be more independent and stabilize their financial situation better than before.

Although the committee members have been trying to domesticate the fruit in their farms, they have not been successful doing so and have been using naturally grown wild sea buckthorn fruits to make juice. The juice is extracted from the fruit by squeezing it and the leftover is used to make tea while its seed is used to extract oil which is good for the skin. Water, sugar and preservatives are added while the juice is bottled and they also plan to make several varieties of sea buckthorn juice like an instant drink that does not require adding water and a sugar-free juice for the diabetic patients. Sugar is used in the juice to balance its acidic nature as the fruit is extremely acidic.

This rare juice for many people in the urban areas has become a source of livelihood for many in the remote high altitude areas of Nepal. The fruit has remained as a neglected shrub due to lack of proper promotion and financial and technical assistance. If utilized and assisted in proper ways, this fruit which is available in most of the higher altitude region of Nepal, has a greater market in national as well as international context due to its high medicinal values.