Shanti Udas, the Director and Procurement Chief at Kaski Model Hospital, have been working to raise awareness among the women regarding the health issues of breast and cervical cancer. This village girl has been working hard to save and change lives of many Nepali women who are unaware of the harmful and deadly diseases they might be struck with. Born in a village of Tanahu to the parents who believed in gender equality, she was lucky to have her choice of subject and career to carry on with. Her parent’s support and belief in her motivated her to do best in whatever she chose to do.

The mother of two daughters, she enjoys balancing her professional and personal life. Coming from a medical background with a diploma in Pharmacy, she conducts women-oriented health awareness programs as she believes that the women who are fortunate should help the less fortunate. One program she conducted was on uterus prolapse and others are on breast and cervical cancer in association with various organizations. One reason she chose this field was losing her father to cancer. Most of the women in Nepal suffer from breast and cervical cancer and that is because of their lack of awareness as well as hesitation of discussing about the diseases related to their sexual organs. 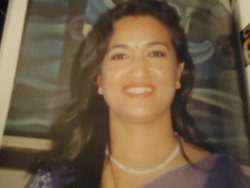 She is also the Health Director of Lion’s Club of Pokhara Seti  Gandaki, and has led a breast cancer awareness program for the Lion’s Club in Jomsom along with four Japanese doctors of the Japan Association of Breast and Thyroid Sonology (JABTS). In the program, 52 women underwent free high quality ultrasound tests and were taught to follow the instructions of the audio-video breast cancer self-check CDs and were also counseled and advised on the disease. The program was conducted in coordination with Step Nepal and the women from nearby villages like Lete and Ghasa also came to attend it. They had also organized a camp on uterus prolapse in Rupatal and a similar program was organized in Pokhara for Nepa Newa Misa Daboo where 50 women participated. Some women also discovered lumps in their breasts during these programs and also the women undergoing the breast cancer treatment attended with an eagerness to learn more. 45 women in Pokhara underwent a pap smear test to check for signs of cervical cancer. This program was conducted by the Women’s Empowerment Committee where Shanti Udas is the president and the women were invited to undergo the test for free. She has been asking with few hospitals for their support and also the Pokhara Sub Metropolis has been providing aids. Moreover, she has been personally supporting women who need gynecological help.

One who is actively involved in spreading awareness regarding the issues like breast and cervical cancer, Shanti Udas is also the Chairperson of Nepa Newa Misa Daboo and the Public Director at Kaski Finance. Speaking on the story behind the establishment of the Kaski Model Hospital, the hospital was initially started as a poly clinic by a team of like-minded people and six years later, it has been operating as a full-fledged 50-bed hospital that provides treatment for everything except eyes and ears.