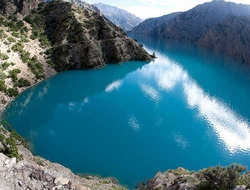 Ever heard of a trans-himalayan national park? Well, there’s one in the northwestern region of our country covering an area of 3555 kilometer square of Dolpa and Mugu districts of Nepal. It was established in 1984 with the headquarters in Palam.
This park shows spectacular landscapes and is one of the most scenic mountain parks in the world. Majority of this park lies north to the Himalayan crest with elevations ranging from 2130 meters to 6883 meters.
Due to variation in ranges, the flora is extremely diverse. The trans-himalayan slopes consist of rhododendron, caragana, salix juniper, White Himalayan, birch, silver fir; and the list goes on. Less than five percent of the park consists of forest and this forest is home to endangered species like snow leopard, grey wolf, musk deer, blue sheep, Tibetan sheep, jackal, Himalayan Black Bear including six species of reptiles ad 29 species of butterflies.
The Phoksundo Lake, deepest ad second largest lake of Nepal which is famous for its magnificent turquoise color and a depth of 3660 meters stays protected in this national park.
Moving towards climate, this park endures severe variations from dominating monsoon to arid climate. Winters are extremely severe with temperature below freezing level above 3000 meters throughout the winter. The park is full of gompas among which Shey Gompa is the most famous one. This park shelters nine thousand people.