Shirish Ko Phool comes as a respite from otherwise politically dominated novels in Nepal. Written by Bishnu Kumari Waiba, known popularly with her pseudonym Parijat, the novel does not have any political grounds and is not influenced by politics in anyway. Although the book is only sixty pages long, it is capable of leaving a powerful impact on the readers.

The novel sings of pain and the bitter irony presented in the book will remain with the readers for a longer time. The characters to which people can relate themselves and also being a book with a heart are its major strength. The bitter and sad narrative and its expedition into the deepest thoughts of the main character having a universal character is what set the book apart from others. 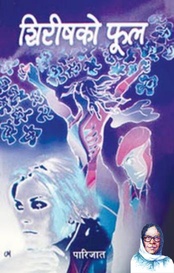 Shirish ko Phool revolves around the context of mid-life crisis in the life of the narrator, Suyog Bir Singh who is also a former World War soldier. Living an unremarkable and uncelebrated life in vacuum (sunya), he has no one to call his family or friends, which is why he pours all of his bitterness into alcohol. He often goes to a bar for drinking where he finds a younger drinking partner Shivaraj who takes Suyog to his home where he meets Sakambari, a woman sixteen years younger than him and the one he grows infatuated to.

In the book, Sakambari is presented as the Shirish (from where title of the book comes from), a flower that blooms giving warmth to the cold world. Overpowered by the love for Sakambari, Suyog also feels a sense of self-hatred. His consciousness is shaken to its core by his feeling of love and life being painful. Sakambari, just like a flower, gives up and withers down to the earth.

The book does not tell the story of victory but of an empty and meaningless life and a toxic love for a woman. Sakambari is presented as a strong, independent and spiteful woman with atheistic attitudes who resents looking weak in front of her male counterparts while Suyog is a lowly mortal who sees Sakambari to be stronger than him. Although the book is intensely lyrical, its language is understandable. One of the best novels in the world of Nepali literature, Shirish ko Phool by Parijat is a must-read. It has also been translated to English as The Blue Mimosa and is also included in some of the University courses.