Born on 2000 BS to father Ganga Bahadur Basnet and Mother Mankumari Basnet, Nepali singer Kumar Basnet is second child among his nine brothers and two sisters. He stayed at his ancestral home in Dolakha with his mother until the age of seven after which he came to Kathmandu and started his schooling from Padmodaya High School.

His father was interested in literature as well as music which is why his house was always accompanied by some of the popular literary figures of Nepal. Whenever they used to come, Kumar used to sing and dance the folk songs he had learned back in Dolakha. He got involved with Bhairav Nritya Dal, one of the most powerful organizations for conducting cultural programs, in the year 2009 BS without letting his family know and became famous as a dancer. In the year 2011 BS, he accompanied his father to Kapilvastu, Taulihawa, where he was transferred. He joined Buddha Ma. Vi. and during this time, he met Dharmaraj Thapa who took Kumar to meet with K. I. Singh. As his father was being transferred a lot, they send him to Gorakhpur, India for better study opportunities in 2013 BS. But he returned back to Kathmandu after having a fight with his local friends there. He then, with the recommendation of Bal Krishna Sama, went to Silong in Assam, India, for a cultural program in the year 2014 BS. His songs and dances made him a popular figure there. When his father found out about his activities, he went searching for Kumar to Assam and brought him back forcing him to continue his studies. So, he joined Nandi Ratri Ma. Vi. and passed his SLC from there in 2015 BS. He joined Tri-Chandra College in 2016 BS for his I. Com. and during this time, his father got him a job at Nepal Rastra Bank. He gave continuity to his studies, work and musical interests. 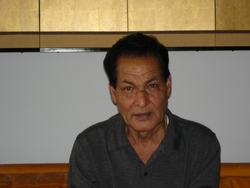 In the year 2016 BS, Radio Nepal had published a notice regarding a song recording in the voice of Nepali singers. He went there for the interview and was selected by Natikaji, Dharmaraj Thapa, Shyamdas Baishnav and Prakashman Singh. He sang and recorded a folk song ‘Chautari Ghyagla Nani’ and a modern songs ‘Rimjhim Pani Parla’ and after some time, his song ‘Oie Nana’ was aired in Radio Nepal which made his existing popularity rise even more.

He married his love Sarada Karki in 2023 BS, after five years of being in relationship. He has three sons and three daughters. He had always been interested in football, badminton, hunting and fishing along with singing. He has served as conservationist at the Nepal Music Society, President of Sanskritik Sambardhan Parishad, Honorary Member of Nepal Film Board, Member of Sikshya Mantralaya UNESCO, President of Pratilipi Adhikar Sanrakshyan Maanch and has been working to insure the copy rights of the Nepali artists.

He has sung and recorded over 200 folk songs and also some movie songs. He has also been to many places outside Nepal for musical tours and is considered to the most outgoing (foreign country) Nepali artists. In 1974 AD, he participated in International Folk dance Competition held in France, Belgium and Germany and in 1978 AD, he participated in International Gala Night held in Bangladesh. He has visited India, Bangladesh, Pakistan, China, France, Japan, Switzerland, Belgium, North Korea, South Korea, Australia, Austria, Malaysia, Qatar, Dubai, Saudi Arabia, Burma, America, Singapore, Thailand, Brunei, Hong Kong, England and Italy during his musical tour. He has also been awarded with Gorkha Dakshin Bahu, Trishakti Patta – third, Birendra-Aishworya Sewa Padak, Ratya Record Puraskar, Chinnalata Puraskar, Dharmaraj Thapa Sabitri Puraskar, Sitaram Puraskar, Rastriya Pratibha Puraskar, Narayan Gopal Sangit Puraskar, Lunkarandas Sahitya Puraskar, Hits FM Lifetime Achievement Award 2006 AD, and many other honors and awards. He has was also selected by India in 1980 for ‘Who is in Asia’, by Japan in 1998 for ‘Who is in Asia’ and by America in 2002 for ‘Man of the year’. He was also honored as Cultural Ambassador of Manchester and London by the Mayor of the respective cities during Visit Nepal 1998.

Kumar Basnet is one of the popular Nepali singers known for his folk as well as modern songs and dances.