Megh Lama started his musical career formally, in 2055 BS and he released his first debut album Megh in 2058 BS and second album Thursday in 2063 BS. He was involved in street dramas where he used to perform Leprosy related street dramas before he started doing music seriously. He is also running a cyber café at Dhobidhara, Kathmandu for more than a year. He was also involved in the music studio Music Point which was one sale because all of them (the owners) had their own business to take care of and was not able to give much time to the studio. Although the studio is doing a good business, they are entitled to sell it, however, they might even take up the business if they get little free time. 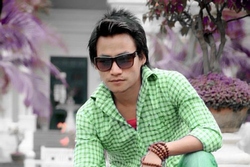 He also had a desire to go abroad to learn something and he is certain of giving continuation to music wherever he goes. Although his first album Megh did not get much recognition, it taught him many things regarding music and the industry and he gained many important experiences of life. His less knowledge about music, media, public relation and other things was also one of the major reasons why his album went unnoticed. The five years duration between his two albums was spent by him learning classical music and other different things like analyzing the Nepali music market, what kind of music was popular and how to sustain himself in the industry.

[youtube]http://www.youtube.com/watch?v=rwF0wAkuyY0[/youtube] His one of the popular song Naulo was penned by Bhupendra Nirajan and was composed by Jems Pradhan. The song seemed to be comic as his friends said it was funny when they first heard it and even he had thought so. When the song was ready, he performed it and everyone appreciated it and they were happy for him as well as his decision to continue with the song.

Megh Lama has been in the industry for nearly a decade, however, he is not so popular due to lack of publicity of his albums or songs by him as well as his music company.