Born to a very famous Nepali musical family of Sila Bahadur Moktan and Kunti Moktan, Subani Moktan is a young, dynamic and talented singer, composer and song writer who has reached towards success at the very young age with her sister Shital. Her love for media has led her to become an RJ as well as a VJ and if she wasn’t a singer, she would have become a top business woman. 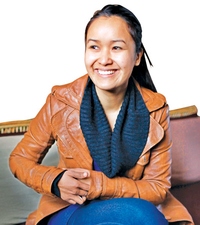 Being born to such a great musical family has been a privilege she is grateful for and had made it easier for her to begin her career while most of the new artists have to struggle hard to achieve what she is privileged to. However, everything in world has some drawbacks and it applies to her life as well. She and her sister are always compared to their mother who has been in the music industry for over two decades now. Although she finds it hard and unfair, she has accepted that she has to live with it and she is grateful for it as well.

Her passion for singing is what led her into the music industries and she finds it hard to survive without it. Although her family introduced her to music, to sing and to learn to create and love music, they never forced her into doing something she didn’t want and it was her own decision to have a career in music. The first song she sang was the one that made her win her first award. Back in grade one, she had participated in all-Nepal solo singing competition where she got the first position. The song was Akha ni hamra akha haina and the award she received then is what inspires her to sing wholeheartedly. She, along with her sister, had written, composed and arranged the songs in their third album. Although she is not certain about continuing singing with her sister or going solo someday, she is certain about keeping her singing career alive until she lives. For her, classical base is one of the most important elements for a singer as it gives a foundation which supports them throughout their musical journey. She has also had training in classical music and advices new artists to get trained in classical music before they begin their career.

[youtube]http://www.youtube.com/watch?v=Jemke6fO7fk[/youtube] She also plays the piano ever since her father taught her and takes piano lessons with her Japanese teacher who introduces her to newer genres every lesson. She has also learned guitar with Phiroj Syandgen of 1974 AD and she plays both the instrument whenever she has time. Born to a famous and important musical family of Nepal, Subani Moktan is also one of the popular young artists of Nepali music industry.