A 16 days challenging and adventurous trek for an ambitious trekker, the trek to Gokyo Ri, Kala Pattar and Dudh Koshi is one of the must-live experiences in Nepal. The trek not only takes you to the foot of Mt. Everest, but also to the summit of two peaks Gokyo Ri and Kala Pattar, scaling 5340m and 5554m respectively. One also needs to face the challenging 5420m Cho La pass. The views from these peaks are mesmerizing. Some of the highest breathtaking snowcapped mountains of the world including Mt. Everest, Lhotse, Nuptse, Makalu, Cho Oyu, etc. welcoming you close as you trek through them is definitely something to go for.

A visit to Everest Base Camp included in the trek takes you closer to the magnificent view of Khumbu Icefall. The trek starts at the village of Lukla, after a flight from Kathmandu passing above some of the spectacular mountain ranges. The first camp on this trail is located at Phakding in the Dudh Koshi valley. From Phadking, after crossing several rivers on high suspension bridges you reach at the entrance to wonderful Sagarmatha National Park. From here, ascend to Namche, the main trading village in Khumbu region, starts. Namche is a beautiful Himalayan village and while you are here, a visit to the Khunde Hospital established by Sir Edmund Hillary is recommended.

The main trail from Namche leads to Phortse Tenga and from there to Dole. The beautiful views of the mountains and the colorful rhododendron forests are just splendid. Trekking through this trial, you head for the lakes in Gokyo, and are accompanied by some of the most amazing views you have ever seen in your lifetime. Pangka, Ngozumpa Glacier and Dudh Pokhari are the three rivers that you can get a chance to visit and to the eastern part of Dudh Pokhari in the Gokyo village above which lays the Gokyo Ri. 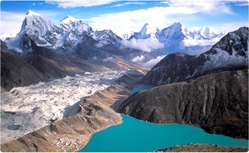 From here, passing through the ridge, an old lateral moraine, rocky scramble and a small snow covered glacier enjoying the magnificent views of Rolwaling Valley in the west and Ama Dablam to the south east, you descent to the pastures below. One has to go round the glassy slopes above a lake, the Tshola Tsho, to join the main Everest trail in Pheriche and Tengboche from where the trail flattens and follows the valley on west side of Khumbu Glacier to Lobuche.

The trail continues to follow the valley and from here you go to Kala Pattar, one of the finest viewpoints in Khumbu, in the afternoon when the sunset color begins to appear on Everest. From here the trek to Everest Base Camp begins which is accompanied by the Khumbu glacier, translucent ice pinnacles and seemingly bottomless crevasses. While returning from here, a visit at the Himalayan Rescue Association’s trekker’s aid post in Pheriche would be interesting. The trek leads you to the Pangboche where the oldest monastery in the Khumbu region founded in 1667 that houses relics that is said to be the skull and hand of Yeti exists.

From here, following the river, crossing it and climbing through the rhododendron forests will lead to Tengboche and its famous monastery. The place provides excellent views of Kwangda, Tawache, Everest, Nuptse, Lhotse, Ama Dablam, Kantega and Thamserku Himalayas. You would then, descent to the bridge over the Dudh Koshi River at Phunki Tenga where you could find water driven prayer wheel. After returning back to Namche, you would trek back to Lukla from where you will fly back to Kathmandu. The last night in Lukla could be made fun by enjoying and dancing along with the Sherpa porters and also indulging yourself to the local food and drink.

This sixteen days trek to Gokyo Ri, Kala Pattar and Dudh Koshi would be the most thrilling and amazing experience of your life that would always take your mind back to the memory lane even after several years.