Sixth highest mountain of the world

The sixth highest mountain in the world, Cho Oyu, which means “Turquoise Goddess” lies in the Himalayas and is 20km west of Mount Everest at the border between China and Nepal. This 8,201m high mountain lies in the Mahalangur Himalaya Range and is considered as one of the easiest route in the Himalayas. After Annapurna in June 1950, Mount Everest in May 1953, Nanga Parbat in July 1953, and Mount K2 in July 1954, Cho Oyu was the fifth 8000 meter peak to be ascended.

The first attempt to climb the summit was made in 1952 by an expedition led by Eric Shipton including Tom Bourdillon but could not get past an ice cliff above 6,650m due to technical difficulties. The first successful attempt to climb the mountain took place on October 19, 1954 through the northwest by an Australian expedition that included Herbert Tichy, Joshep Jochler and Sherpa Pasang Dawa Lama. 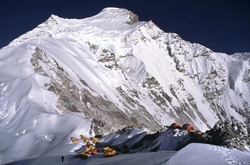 While going through the history of ascending the summit of this mountain, it comes in light that in 1958, an Indian expedition attempted second ascent in which Sherpa Pasang Dawa Lama reached the summit for the second time. This was also the time when first death occurred on Cho Oyu. In 1959, four members of an international women’s expedition were killed due to a storm during their climb. In a controversial third ascent by a German expedition in the year 1964, controversial because there is no proof of them reaching the summit, two mountaineers died of exhaustion in camp 4 at an altitude of 7,600m. In 1978, two Austrian mountaineers Edi Koblmuller and Alois Furtner reached the summit through the extremely difficult southeast side. Reinhold Messner succeeded on his fourth attempt in the year 1983. On February 12, in the year 1985, Maciej Barbeka and Maciej Pawliskowshi made the first winter ascent which was repeated three days later by Andrzej Heinrich and Jerzy Kukuczka. The first solo ascent of the summit via south west face took place in 1994 by Yasushu Yamanoi.

This beautiful and also the sixth highest mountain of the world is also considered as one of the easiest snow route mountains.