Born on 2 Magh 2002 BS, Nepali singer Tara Devi is acknowledged as Swor Kinnari because of her melodious and sweet voice. She was born to Krishna Bahadur Karki and Radhadevi Karki who had a panpasal (beetle leaf shop) in Indrachowk. Her father used to play tabala and her aunt (father’s sister) used to sing in the bhajan mandali that was organized in Bhairavnath. Tara Devi used to come here and sing sometimes and as her aunt was a popular singer of that time, she used to lose herself in her aunt’s voice.

She was inspired by her father and her aunt to enter into the field of music and started humming songs in her house. Her father took her to Ustad Bhairab Bahadur Thapa to give her formal training in music. She went to Radio Nepal with her music teacher at the age of 6/7. She sang many children songs and was paid Rs 5 to 10 for that. Her songs were broadcasted live through Radio Nepal. She recorded her first song (for young generation), a duet with Bhairav Bahadur Thapa in the year 2012 BS. It was penned by Shyamdas Baisnav and the music was composed by Bhairav Bahadur Thapa. She had been singing as a contract singer until 2015 Bs when she was appointed as a singer in Radio Nepal. She passed her SLC from Biswa Niketan Ma.Vi., Tripureswor during this time. As she was more interested in music than studies, she stopped her studies and got involved into music.

She was promoted one step further and she served in the position of senior singer for about thirty years. She continued her study in music along with her work. She got married to Shiva Bahadur Shrestha, the love of her life and a pilot by profession, in the year 2022 BS with the acceptance of her family. She had two sons and a daughter. She studied classical music in Prayag Sangit Samiti, Ilahabad and completed her course in the year 2032 BS. She was gradually promoted to an under secretarial level singer in Radio Nepal and she spent about 42 years there. She sang around 4000 songs of various genres like modern, movie, national, bhajan during this time period. Most of her songs were composed by Natikaji, Shiva Shankar and the lyrics were penned by Kiran Kharel and Ramman Trisit.

She was close to musician Natikaji and he used to offer her songs as soon as he created some good music. However, in 2033 BS, they had some discussions during the recording of the songs for the movie Mannko Baandh and they stopped talking for about three years. She composed her songs herself during this time. The song Jane ta gaigo, vaigo chithi aaena got the first position in music as well as voice a modern songs conference conducted by Radio Nepal. The song was composed by Tara Devi herself.

She was fired without notice from Radio Nepal in the year 2047 BS. Four years later, her eldest son died of blood cancer which affected her mentally. In the year 2055 BS, she lost her husband in a plane crash and this series of tragic events left her broken and hurt her deeply. 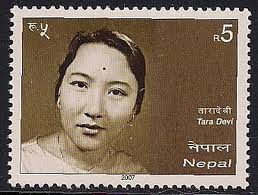 She sang not only in many parts of Nepal but has also visited India, Russia, Korean and Iran for her musical performances. She was awarded with Mahendra Bhusan, Su. Pr. Gorkha Dakshin Bahu 1st, Jagdamba Shri Puraskar, Chinnalata Puraskar, Indrarajyalaxmi Pragya Puraskar and many other medals. She also received Tuborg Outstanding Award and Natikaji Sangit Samman by Nepal Television. The government has also issued a postal stamp in her honor.

Although she had dedicated all her life to music and never made any compromises in musical field, her family relations, because of that, were cold and not satisfactory. She suffered from Parkinson disease for about ten years before she died in the year 2062 BS.