Born to the aristocratic Rana family in Palpa, in 1917, Diamond Sumsher Rana was on the high rank of the Nepal Army at the age of 20. Despite being a Rana himself, he loathed the Rana rulers. He was an advocate of the people and democracy. His decision to quit the guns and pick up the pen earned him the recognition as the first important historical novelist. He was the first author to survive solely on the royalty of his novels. He died at the age of 94 in 2011.

His novel ‘Seto Bagh’, meaning ‘White Tiger’, 1973, revolves around the life of the Jagat Jung Rana, the eldest son of Jung Bahadur Rana. The plot is set around the time when Jung Bahadur Rana was in power and after his demise. It has been translated into French, English and Japanese.

The novel describes Jung Bahadur Rana losing his grip over the control of the palace and also the fall of his sons and the rise of his nephews to power. However, the novel is like a sequel to Diamond’s previous novel ‘Basanti’ where he wrote about the rise of Jung Bahadur along with his love life. Seto Bagh is more like a biography of Jagat Jung.

It describes the love relation between Jagat Jung and the Princess, the daughter of King Surendra Bikram Shah. The novel starts with the mention of ongoing war between Nepal and Tibet. As the war proceeds, the love story between the two goes along. It describes the emotional state of Jagat Jung as he fights the urge to accept the Princess’ love. The fear of being called a sinner and cheat for stealing his cousin’s fiancé being greater than the courage of accepting his own feelings for her, he tries his best to make her hate him.

However, with the help of their cousins and the support of their family, they are married. Although his love life becomes successful, his chances of being the heir of the Prime Minister’ position (Shree 3 Maharaj) were dimmed. The story proceeds with the downfall of the bright and talented Jagat Jung and rise of his cousins. It tells how the sons of Dhir Shumsher Rana massacred their own clan in cold blood (Uncle and sons of Jung Bahadur Rana) for the power. 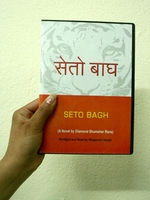 All in all, the book is excellent in terms of the language and setting. The account of the events might not be authentic as the writer himself explained writing the book inside the jail deprived him of many facts. However, he used anecdotes to develop his novel, mixing fiction with facts. The book is a must read for basic understanding of the nature and circumstances of the Rana reign. The audio format of the book is also available.