Born on 3 Jestha, 2049 BS in Dillibazar, Kathmandu, Rejina Rimal is the middle child of father Rabin Rimal and mother Padmini Rimal. Her childhood was spent in Kathmandu itself and she studied up to grade 1 in a school near her home. She studied at Galaxy Public School for next two years and joined Suryadaya Boarding School from grade 5. This school going kid got instant hit at a very young age with her sweet and melodious voice.

Her worst moment till now was the time when she had to sing on stage while she was in grade six. She hit the mike with her nose and her nose started to bleed. So, instead of performing on the stage as scheduled, she stood there with her bloody nose and had the crowd staring at her. 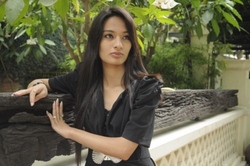 She got interested in the field of music because of her father and her uncle who are involved in music field as well. Encouragement from her father is one of the major reasons how she became established as a singer now. She started singing at the age of 6 and has been performing on stage since then. She has had numerous opportunities to perform on stage and has won several prizes as well. This diehard fan of Indian singing legend Lata Mangeshkar grew up listening to Lata’s tapes her father brought for her.

Her singing career began at the age of twelve when she recorded her first song “Basanta Ko” offered by the musician Samrat Thapa. The song was recorded at their own studio Ciney Sounds which is known as Genesis, nowadays. Although it was originally recorded to test her performance, everyone loved it and the negotiations about making the albums began. She released her first album “Pari” as a result of the efforts of two laborious years. A music video of the song “Ma Ramro Bhanda” directed by Alok Nembang has been released from the album. The lyrics of the song are penned by Arun Tiwari and the music compilation was done by Raju Singh. The songs in the albums are mainly of eastern as well as western pattern.

This easy going and friendly person by nature likes to treat everyone equally and does not intend to hurt anyone. As per her bad habits, she considers talking a bit loud and being lazy are the habits she would like to get rid of. Rimal has been taking classical singing classes under the guidance of Sangeeta Rana for past few years and has had the opportunities to sing as a playback singer on few Nepali movies like “Saput” and “Mr. Mangalay”. Also, some of her songs from the movies have been able to win the heart of the audience making them popular and super hit. The talented girl who aims to be a well known singer also has an interest in interior designing.