The Tamang community is the indigenous inhabitants of the Himalayan region of Nepal. One of the major Tibeto-Burman speaking communities in Nepal, their ancestry could be traced from Tibet. They have their own unique culture, tradition, language and religion. They mostly reside in the entire mountainous regions of Nepal and also in the adjoining regions of India, Myanmar and Bhutan.

Found mostly in the districts of Sindhupalchowk, Rasuwa, Kathmandu, Bhaktapur, Lalitpur, Dhading, Makwanpur, Nuwakot, Ramechhap, Dolakha, Chitwan and Kavreplanchowk, Tamangs live mostly in the north and east of the country. Most of the clan does not allow inter-caste marriages, however, some permits marriage between communities like Gurung, Bhutia, Magar, Kiratis and Sherpa. Tamangs, one of the very ancient tribe of Nepal, are the original people of Yambu (Kathmandu valley). The history of Nepal states that the Enlightened Manjushree made an ancient abode of Tamang in Yambu and the ancient Tamang song Gyanaka Gyamse Phepkaziam or ‘ appeared from China’ says that the oldest tribe of Yambu is Tamang. The version of the Dynasty of Nepal and Dr. Shetenkoko, who had visited Nepal on an archaeological study program under an agreement between Nepal and USSR, also state that Tamangs are the oldest tribe of Nepal. 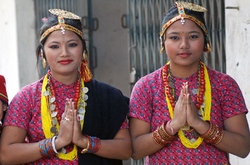 Tamangs were previously known by various terminology among which Murmi is one and it is said that the term Tamang was came to existence during the rule of King Tribhuvan and when the then Prime Minister Bhim Shumsher had formally used it for the first time under the request of Sardar Bahadur Jungabir (who also belonged to the Tamang community). It is also found that the term Tamang was scriptured by King Boom Degon (1253-1280) who had ruled the present day Mustang region of Nepal during the 13th century. Although many differences prevails regarding the origin of Tamang, most common belief is that the word was derived from the Tibetan word Tamag, in which Ta means ‘horse’ and ‘Mag‘ refers to ‘rider’. It is believed that after the Nepal-Tibet war, some of the horse-riding soldiers of Tibet had settled permanently in the Himalayan hills of Nepal and these people were, later, recognized as the Tamang nationalities. However, this matter holds many controversies.

Tamangs occupied the Terai hills of Nepal in the 7th century before its creation and around the 18th century, the land owned by Tamangs were taken away and distributed to the new rulers of the region, following the conquests from other communities. Today, Tamangs along with Sherpa, Rai, Limbu and other Mongolian ethnic groups are known as Gurkha because of their maximum participation in the army and their presence in the Gurkha war against British East India Company.

They have their own language and although all that they have today is Tibetan in origin, those living outside the traditional area have mostly adopted the cultural patterns of their immediate neighbors. There are six types of societal leaders among Tamangs that are Tamba, Ganba, Bonbo, Labonbo, Lama and Choho and they have their own roles to play in the development of the Tamang society. The Tamba is responsible for the cultural aspect and plays important roles in marriage ceremonies, the Lama carries out death rites (Ghewa) and observes activities related to the Buddhist religion, Bonbo provides treatments to the sick and needy of clan deities and propitiates the local gods and goddesses, Labonbo (Laptaba) keeps the history of the clan and lineage alive through the worship of clan deities and the Choho looks into cases and dispenses justice maintaining peace, security and wellbeing in the society. The Ganba participates in all types of social, political and religious activities and observes them and also whether the duties have been fulfilled by the other leaders.

They practice Buddhism and there is no existence of the practice of the Hindu caste system, however, there are numerous different clans and family-sects. Institutions like Nhangkhor play active roles in conducting the socio-cultural activities of the community. Nyingma, the oldest of the four major schools of Tibetan Buddhism is followed by most of the Tamangs. They also practice the veneration of ancestors and worship ancestors and many deities and guardians like the deities of Khappa, soong, foopshang, mraap soong, family deity, place deity and clan deity, etc. The death rituals are the most important ritual performed among the Tamangs. One of the most interesting aspects of these death feasts is that the potential marriage couples are also formed here, hence, it is conducted for adults only. The Lamas usually marry the daughters of other Lamas and teach their sons to act as Lamas.

The major festivals celebrated by the Tamangs are Buddha Jayanti, also known as Saga dawa in their language, Losar (New Year), Tihar and Dashain. They use the Tamang language and their script is known as Sambhota, however, one of the leading Tamang organizations Nepal Tamang Ghedung uses a script known as Tamyig, a well known modified form of the Sambhota script. Their favorite musical instrument is the damphu drum (tambourine) and Tamang Selo is one of the most popular traditional Nepali music. There are allrounders and are expert in many crafts and activities. They are also involved in works like weaving sheep wool jackets, bamboo baskets, receptacles for storing rain and leaf umbrellas and they are carpenters, masons, builders and wooden plough makers. Some are also involved in Thanka paintings and carving designs in wood, mountaineering, athletics, farmers, coolies, etc. They mostly eat what they grow, however, do not allow buffalo meat, garlic, nettles or paha the tree toad to the forest in their houses although they might eat it if cooked outside the house or someone else’s house.