The famous tantric temple of Bajrayogini, also known as Gum Bihar is located in the hills of Sakhu, northeast of Kathmandu. The temple is also a proof to the belief that Buddhism existed in Nepal from around the start of the first century A.D. The temple was later repaired by Manadev as an act of redemption for his sins (he had inadvertently killed his father) and he later built a stupa in the area that lies next to the temple. The Buddhist shrine Gum Bihar was built during the Licchavi period (300-879 AD).

The Bihar lost its importance to the temple as people began to divert to Hinduism starting from the eleventh century. The three storied temple of Bajrayogini accommodates the image Ugratara Bajrayogini and the main entrance of the temple is plated with gold. The temple of Bajrayogini stands at the shore of Sali Nadi where thousands of devotees gather to take holy dip into the river and worship the goddess Swasthani during the entire month of Magh. 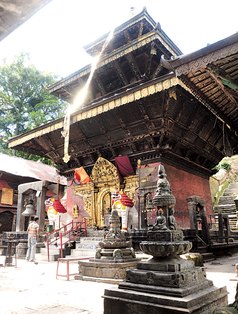 The idol of the goddess is depicted as having two hands, one holding a sword and the other, a lotus and her face and hands are painted red. She is decorated with heavy clothing and ornaments. Also, there are other smaller images of beasts at her side inside the main temple and also a beautiful water tap completes with decorative statue dating back to the fourth century is there in the area. The temple area also houses other interesting temples and caves around it, among which some are considered to be older than the temple itself. Moreover, the courtyard has a number of yagya kundas constructed for fire rituals during which offerings are made to the fire god. The devotees make holy offerings during the fire rituals to please the fire god for the fulfillment of their wishes.

The temple being one of the oldest temples in Nepal has high cultural significance and is an integral part of the Nepali way of life. The area was also selected for the spot of the 29th Soil Conservation Day celebration in the year 2009.