The temple of Surya Binayak

The temple of Surya Binayak is situated in the Surya Binayak area, south of the ancient city of Bhaktapur.  It is one of the four most important temples of Lord Ganesh in the valley, other three being Chandra Binayak in Chabahil, Jal Binayak in Chobar and Ashok Binayak in Kathmandu Durbar Square.

The devotees coming here mostly consist of parents with their ill children as this form of Ganesh in the temple is seen as a curing god, especially for deaf and dumb. Ganesh is one of the most popular Hindu gods who is worshiped at the beginning of any auspicious events and occasions. He is also considered as the god of literature, wisdom and worldly success and his head symbolizes the soul while his body symbolizes the earthly existence. The idol of Lord Ganesh in the temple is red also in color, as is the case in most of the temples around Nepal. 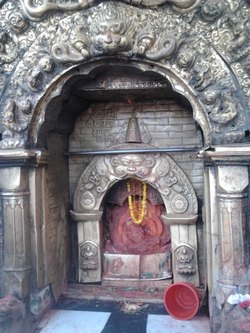 The temple of Surya Binayak is situated on top of a small hill overlooking the area. One need to climb some steps to reach the temple above and the both sides of the steps are covered with trees that looks like a forest, but not so dense. On the bottom of the steps, there are few shops that sell the elements required in worship, gifts and idols and images of the god. There is a gate at each end of the temple as well as each end of the steps. The temple area is large and wide and there are two pavilions opposite to the statue made for conducting ceremonies like marriage, bratabandha, etc. On the right side of the statue, there is a big bell whose handle is tied to an iron chain and locked on its base. There are also shelters for the priests to live in. On the two sides of the temple holding the idol, bells are hung by the devotees. The view from Surya Binayak is definitely wonderful and one feels the urge to take their camera out. Another interesting thing is the numerous mirrors offered to the god by the devotees hanging around the temple. On the right end of the temple, a gate leads to another way, towards the jungle and just a few steps down from the temple is a bathroom. The temple is housed on a two storey building with the temple on top and party palaces below. This side also has a few steps and sidewalks.

Though the main temple is small, the temple of Surya Binayak is one of the most beautiful temples of Lord Ganesh in Nepal and also the location of the temple has added to its beauty. The open are smells of fresh air, incense sticks and nature. It is one of the must-visit temples in Kathmandu.