The three temples of Taleju Bhawani

Taleju Bhawani is one of the most powerful goddesses and is also regarded as the clan goddess of the Malla kings who ruled Nepal from the 12th to the 18th century because of which the temple of the goddess is present in three major cities, Kathmandu, Bhaktapur and Patan. The goddess has four heads and ten arms and the three temples have the golden statues and metal work depicting the goddess. The temples accommodate the shrines of both the goddesses Taleju Bhawani and Living Goddess Kumari.

The temple of Taleju Bhawani is housed in the Bhaktapur Durbar Square premises and is the oldest of all the three temples. It is located in Mulchok Court near the Golden Gate and traditionally, it was opened only for the ruling kings. However, the temple is now open for all the Hindus and although everyone could visit the temple, non-Hindus are not allowed inside. The archways and the window frames are beautifully and artistically carved that reveals the artistic and architectural details from the past centuries. 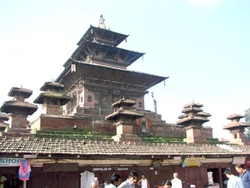 Built in 1667 during the reign of King Shree Niwas Malla, another temple of Taleju Bhawani is located in the center courtyard of Patan Durbar Square. Just across the temple is the Taleju Bell which was installed in 1736 by King Vishnu Malla so that the petitioners could alert him when they had filed a grievance or complaint.

The third and (the main temple) of Taleju Bhawani is situated in Trishul Chowk in the Kathmandu Durbar Square. The temple was constructed in 1564 by King Mahendra Malla and is the most visited of all three temples of the goddess. It is said that the temple was built after the suggestion of the goddess herself in the shape of a yantra, a musical diagram which is said to have magical powers. The South Association for Regional Cooperation states that the goddess made a special appearance for the temple’s dedication ceremony. According to the legend, the goddess came disguised as a bee. 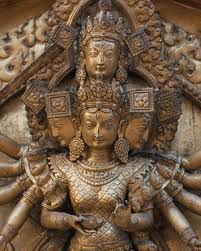 The temples are not only rich in religious values but also have high cultural, architectural and historical values and are an important aspect of the Malla era in Nepal.