Kanchimba is an appetizer found in most of the Thakali restaurants in Pokhara, probably in Kathmandu as well, as it is an appetizer popularly served in the Thakali hotels and restaurants in Pokhara. Thakalis, with their precious culinary talents has been able to make a mark on the lives of foodies as no food enthusiast in Nepal might have ever missed a Thakali restaurant or Thakali food.

Served especially as an appetizer or as a snack in Pokhara, Kanchimba is made up of buckwheat flour. Buckwheat, commonly known as phapar in Nepal is one of the popular food crops with Phaparko roti being one of the most desired foods all over Nepal. Conventionally popular for making rotis among the Brahmin and Chhetri communities, the buckwheat flour is also used for making Kanchimba among the Thakalis. 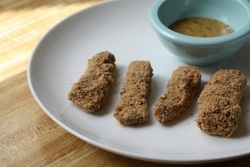 Kanchimba is also easy to prepare and does not require much trouble as well. This fast to cook and good to eat snack looks like the small crispy sticks (resembling Kurkure). It also does not require many ingredients as the buckwheat flour and some water is the ingredients required apart from oil for frying and timurko chhop (Szechuan pickle).

For making Kanchimba, first of all, the buckwheat flour should be kneaded with water. When it forms into a soft dough, take a small quantity of the dough into your hand and roll it on your palm to give it a thin cylindrical shape, just like a pen only smaller, about one or two inches long, according to your desire. When you have enough rolls ready, heat oil in a pan and put some oil enough for deep frying. Start frying the rolls (Kanchimba) in the oil but make sure not to let it get stuck with one another or get burned. When its color changes to golden brown, take it out of the oil and absorb excess oil using a paper towel. Get your timurko chhop ready and serve it with your hot Kanchimba.