The festival of Bala Chaturdasi

Bala Chaturdasi is a religious event during which Hindu and Buddhist devotees pray for their deceased family members. Also referred to as Sat Bij Chharne Din, the festival usually falls during late November or early December. 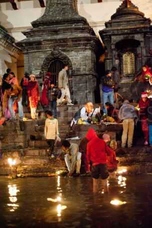 The festival begins during dusk when devotees light oil lamps. They recite mantras to keep themselves awake all the night to ensure that the lamp keeps burning. The next day, as the dawn breaks, they take a holy dip in the Bagmati River and pray to Pashupatinath to wish eternal peace to departed ones. Then they talk a walk around the temple (the path is usually the same always) to the Sleshmantak forest on the opposite bank of the river and back to the temple again. On the way, they drop seven different kinds of grains (the grains are considered to be holy), or Sat Bij from place to place. All this must be done before sunrise.

Seeds are dropped in remembrance of  beloved dead ones. It is believed that when people perform the festival of Bala Chaturdasi, they secure a safe place for their relatives in heaven. It is also believed that this helps settle the restless souls of departed ones who were not properly burnt.

The festival of Bala Chaturdasi relates to Bala Nanda, a trader, who came to the auspicious cremation ground of Arya Ghat to attend a cremation ceremony for one of his relatives. As the body lay burning on the pyre, mourners along with Bala Nanda sat nearby eating the ceremonial food being served. When he was eating, a small portion of the dead body fell from the fire onto his plate. He accidentally ate it but soon after, he transformed from an ordinary man into a horrible demon with a silver head. He was now fond of human flesh.

After that, Bala Nanda took the dead body from the pyre and devoured it. People were terrified and fled here and there. Because of his demon-like behavior, Bala’s name was changed to Balasur, the great demon. Arya Ghat soon became the demon’s favorite place, which explains why the people were afraid to go to Arya Ghat to cremate their relatives. They asked the king to solve the problem. Knowing that Brisha Singh was a close friend of Balasur, the king asked him to kill Balasur. Brisha then deceived Balasur and killed him.

No sooner did this happen, Brisha started to feel guilty. He meditated in the Sleshmantak forest and prayed Lord Shiva for the salvation of his demon friend. Lord Shiva was pleased by Brisha’s sincere affection for his friend. He told him to scatter the seven varieties of grain on the holy grounds of the forest to cleanse the sin of cannibalism by Balasur and to erase his own guilt of having killed a friend.

And even to this day, the practice of scattering seven varieties of grain continues.