The Goddess with No Head

Located in the village of Sakhada, some 10 kilometers south of Rajbiraj (the headquarters of Saptari district) and about 1 mile from the Indian border, is the temple of Chinnamasta Bhagwati, also known as Shakhadeswori. 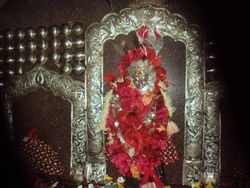 Chinnamasta Bhagwati refers to the Goddess without head. Popularly known as Shakhada Bhagwati, because of its location, it is one of the famous Hindu shrines. There are many stories behind the existence of the goddess and the temple. However, most of the people believe that the idol of the goddess was found while digging the area for construction. Since then, the idol was restored there and worshipped. She was named Chinnamasta Bhagwati because her head was missing when her idol was found. The head was later replaced by gold mask. However, most of the time, a silver mask is put over her body.

The temple is one of the major religious heritages of the country that observes maximum number of national and international pilgrims. Hindu devotees from around the world come to worship the goddess and ask for her blessings. During the last three days of Navaratri (nine days before Dashain), the temple witnesses the massive sacrifice of goats and lambs. Even then, not a single fly is found in the area which is believed to be by the power of the goddess. The goddess is believed to grant the wishes of her devotees and those who have their prayers heard, often come back to take her blessings and make offerings. 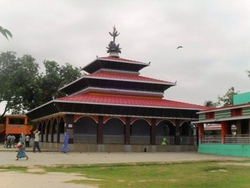 The area around the temple is quite and very clean as well. The wide area houses a Shiva temple, Hanuman statue, Ganesh temple, a wide pond, houses for performing pujas and yagyas. The devotees are to clean themselves in the pond before they enter the temple. Also the water from the pond is offered to the Devi.

One can easily get to the temple by boarding a bus or tempo. Other attraction of the place is the picnic spot that lies on the other side of the pond.  Also, on the way to Shakhada are two other temples, namely, Bagheswori and Dibarsthan, Dibarsthan being the main deity of the Kharshal Tol of Rajbiraj.