Kot Parva (court massacre) was the first massacre in the history of Nepal that led to the rise of the Rana regime. Through this parva, Jung Bahadur Rana became successful in eliminating his rivals and rising in power by declaring himself the Prime Minister of Nepal and the chief of Nepal Army. 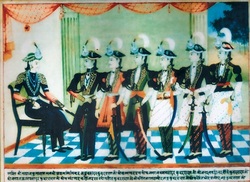 After the murder of the then Prime Minister Mathawar Singh Thapa, Chautariya Fatey Jung became the Prime Minister of Nepal. However, more power lay in the hands of Gagan Singh as he was Queen Rajya Laxmi’s favorite and he also controlled seven regiments in the Nepal Army. On the night of 14th September, 1846, Gagan Singh was mysteriously murdered at his house. The queen became furious over this and commanded Jung Bahadur to assemble all the administrators in the Royal court in Hanuman Dhoka palace. Jung Bahadur ordered his men not to let anyone out of the palace without the Queen’s or his permission. She believed it to be the deeds of the Pandeys and ordered Abhiman Singh to kill them. He hesitated and looked towards king Rajendra for his orders. The King only asked him to investigate the matter and punish the guilty.

Tension grew on the palace seeing the high possibility of bloodshed. Jung Bahadur and Fateh Jung went to calm down the Queen and Abhiman Singh stayed behind. Singh decided to bring his own regiments to the Kot, however, he wasn’t allowed to go outside. He tried to force his way out and was killed in the process that gave way to the bloodshed that took the life of around forty nobles. Many Thapas, Pandeys and Basnyats died in the massacre including the Prime Minister Fatey Jung. Jung Bahadur used this opportunity to eliminate his rivals and gained power. He declared himself as the new Prime Minister and also the Chief of the Nepal Army.