Nepal is a land that has always mesmerized travelers with its festivals, stories and Gods. Unique among all these Gods and Goddesses is the living, breathing Goddess-the Kumari Devi, a deified young girl.

The custom of worshiping a young woman as the source of supreme power is an old day tradition that still continues to this day in Nepal. Kumari is said to be the incarnation of Goddess Tajelu, and she is worshipped as Goddess Durga and Goddess Taleju. 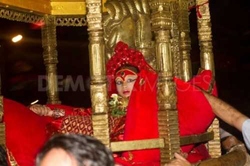 The selection of Kumari, who is entitled to sit on a pedestal for worship as a Living Goddess is a rigorous affair, at least for the young girl. Girls who are between 4 to 7 years of age who belong to the Shakya community are selected on the basis of their physical attributes, just like the colour of their eyes, the shape of their teeth and the quality of their voice. They are then taken to a dark room, where terrifying rituals are performed. The real goddess is one who stays calm and collected throughout these trials. This means that she has the attributes of the fierce Goddess Taleju and goddess Durga.  Other rituals follow that finally determine the real Kumari.

A Girl becomes a Goddess

It is said that the spirit of the Goddess enters her body after the ceremonies are over. She is adorned in the clothes and jewelries of her predecessor.  She is given the title of Kumari Devi, and is worshipped on all religious occasions. All her wishes are attended to, and no one dares to order her about.

Life of the Goddess

The Kumari is kept at Kumari Ghar, at Kathmandu’s Hanuman Dhoka Durbar Square. She seldom gets to visit her family members and other dear ones. She can leave the palace only during ceremonies and festivals. She is always dressed in red, her hair tied in a topknot and the agni chakchuu or ‘fire eye’ painted on her forehead as a symbol of her special powers of perception.

Her feet are now sacred. She does not touch the ground, but travels around in her chariot. She wears no shoes, but red stockings.

The power of the Kumari is perceived to be so strong that even a glimpse of her is believed to bring good fortune. Crowds of people wait below the Kumari’s window in the Kumari Chowk, or courtyard, of her palace, hoping that she will pass by the latticed windows on the third floor and glance down at them. Even though her irregular appearances last only a few seconds, the atmosphere in the courtyard is charged with devotion and awe when they do occur.

Some other devotees enter her chambers where she sits on a lion throne. They offer her gifts, which she must accept in silence. They touch her feet and kiss them as an act of devotion.

It is believed that the Kumari turns human on reaching puberty. The Kumari’s godhood comes to an end with her first menstruation. However, there are occasions when a minor cut or bleeding makes marks the end of a Kumari’s life.  S search for a new Kumari begins.

The power of the Kumari is perceived to be so strong that even a glimpse of her is believed to bring good fortune. So, every year in September, on the auspicious occasion of Indra Jatra festival, people gather in thousands to see the living goddess and seek her blessings.