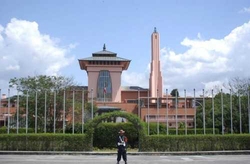 The Narayanhiti Palace was commissioned in 1966 by Late King Birendra’s father, Late King Mahendra, from the American architect Benjamin Polk, then living in Delhi and running the biggest architectural practice in South Asia.

Now, ordinary citizens queue round the block to see how their recent monarchs lived. Of the 52 rooms, only 19 are currently open to the public. The rooms are called ‘sadan’-most sadans named after a district. Some rooms are grandiose – especially the huge towered throne room behind the prominent front window, where extraordinary curved pillars with garish pictures of Hindu deities leap from the walls. These are rooms that clearly cost huge sums to decorate.

Be careful when you step through the outline of the building outside. The building, called ‘Tribhuvan Sadan’, was where the royal massacre took place on June 1, 2001. It was swiftly demolished after the massacre. The building is where you will get goose bumps all over your body as you see signs point out bullet holes in the wall and the location where each member of the royal family was shot that ill-fated night.

Today, the Narayanhiti Palace Museum is rich and historic and grand. Go there if you want to feel the grandeur.

Opening hours
The museum is open from 11 am till 4 pm, even on Saturdays but not on Tuesdays.