The three most beautiful mountains of Nepal according to Listophobia

Stunning pyramids of snow: who wouldn’t stop to look at them and admire them?

Now, here are the three mountains of Nepal that made it to the Listophobia’s list of the best mountains in the world. You can stand there and watch these mountains forever. You wouldn’t want to budge. And when you do leave, you will realize that you have been holding your breath all the while.

They are not wrong when they call it the ‘Matterhorn of the Himalayas.’ 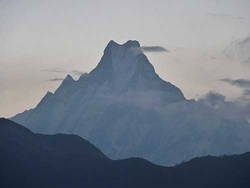 Machapuchre or the ‘Fish Tail peak’ is called so because of the appearance given to it by its double peak. The double summit resembles the tail of a fish.

Machapuchre has never been climbed to its summit. The only attempt was in 1957 by a British team led by Jimmy Roberts. Climbers Wilfrid Noyce and A. D. M. Cox climbed to within 50 m of the summit via the north ridge, but did not complete the ascent; they had promised not to set foot on the actual summit. Since then, the mountain has been declared sacred, and it is now forbidden to climbers.

Pumori, is a mountain on the Nepal Tibet border in the Himalayas. Pumori means ‘Unmarried Mountain’ in the Sherpa language. Pumori is alos called ‘Everest’s daughter.’

Pumori was first climbed in 1962 by Gerhard Lenser of a German-Swiss expedition.