The first series of Parvas (massacres) in Nepal, popularly known as the three massacres gave rise to the century long dynastical rule of the Ranas. This took place during the period of Jung Bahadur Rana, the first Rana Prime Minister of Nepal, who seized the opportunity to eliminate all his rivals and rose to power. 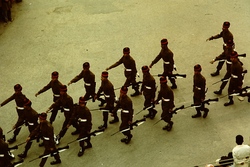 The three Parvas are mentioned below.

Court massacre, commonly known as Kot Parva, was the first massacre through which Jung Bahadur Rana rose to power starting the dynastical rule of the Ranas.

The mysterious death of Gagan Singh on the night of 14th September 1846 led to this massacre. The Queen became furious at his murder and she summoned all the administrators to the Royal court. One thing led to other and the court turned into the grave of around 40 court nobles. Jung Bahadur Rana seizing this opportunity eliminated all his rivals and declared himself the Prime Minister of Nepal and the Chief of Nepalese Army.

Kot Parva was followed by the Bhandar Khal Parva that occurred on 17th Kartik 1903. After the rise of Jung Bahadur as the new Prime Minister and Army Chief, Queen Rajendra Laxmi felt he was threat to her powers. She conspired to eliminate him and raise her son to the throne. The conspiracy was also known as the Basnyat Conapiracy for most of the participants belonged to this noble clan. However, they were betrayed and the instigators were rounded up and executed that led to the Bhandar Khal Parva. Through this Parva, Jung Bahadur Rana exiled the King and Queen to Banaras.

The King began plotting his return from India leading to the third massacre that is Alau Parva through which Jung Bahadur Rana charged the King Rajendra of conspiring against the throne and put him in house arrest in Bhadgaon formally declaring his son Crown Prince Surendra as the new King after which he became the most powerful Prime Minister of Nepal.