Situated in the middle of beautiful hills of Bijaypur in Dharan is the temple of Dantakali (the tooth goddess). The temple observes the presence of maximum number of devotees in Navaratri (nine nights) during the festival of Dashain. Also, on the occasion of Maha Asthami, mass sacrifices of he-goats take place on the temple premises. 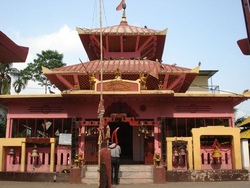 The temple is one of the major Shakti Peeths of Nepal. It is dedicated to the Sati Devi, wife of Lord Shiva. According to the legends, after the death of his wife, Lord Shiva carried her dead body on his shoulder and roamed around the earth aimlessly. After her body started decaying, her body parts fell piece by piece in different places and those places later became the Shakti Peeths. It is believed that the teeth of Sati Devi fell on the spot where the temple stands today. The holy book of Swasthani Brata Katha has stated this and given the name Dantakali as one of the forms of goddess Durga. The tooth of Sati Devi is still believed to be preserved in the temple and it is also said that the tooth very much looks like a human idol.

The place is beautiful with the green hills all around and the sight of the Dharan bazaar from the top is mystifying. The temple holds great religious significance for the Hindus and it is one the must-visit temples during the Bada Dashain festival.