Tihar, the festival of lights

Tihar is one of the major Hindu festivals that is celebrated for five days in October or early November every year. It is the festival of lights that brings the worship of Laxmi, the Goddess of Wealth along with the worship of dog, crow and cow respectively. On the last day, brothers are greeted and blessed by the sisters.

The crow and the dog are regarded as the envoy of the Yama, the God of Death. The first two day observes their worship. On the third day, cow is worshiped in the morning and Laxmi, the Goddess of Wealth is worshiped in the evening with a belief that she would bring fortune to the worshiper. Women keep fast on this day and prepare Sel rotis for offering the goddess. Every house, buildings and temples are graced by the rows of light, usually the traditional Nepali lamp of twisted cotton wick in a small clay bowl of mustard oil. 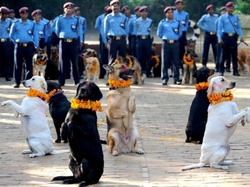 The last day of Tihar is called as Bhai Tihar, commonly known as Bhai Tika. On this day, sisters pray for the long and prosperous life of their brothers. It is believed that a girl called Yamuna whose brother was ill prayed for his long and healthy life. When Yama, the God of Death came to take her brother with him, she pleaded for some time to worship her brother. Yama granted this wish to her. Then the girl performed a long ceremony for her brother and Yama. Yama was very pleased with her and promised her not to take her brother’s soul until the offerings of turf grass and the flowers remained fresh and unwilted. As the turf grass and the flowers remained fresh till the next Bhai Tika, Yama granted the boy a long life. From then on, the sisters began to worship their brothers for their long and healthy life.

It is celebrated with lights, lighting the butter lamp every where in the house. Children and elder enjoy fire crackers, go door to door singing Deusi and Bhailo (traditional Tihar song and dance) and enjoy the Selroti and Anrasa.