Toriko Saag is considered as one of the healthiest green leafy vegetables in Nepal. It is found all over the vegetable market during its season, be it plains of Terai or hills or the valley like Kathmandu. Rare are the kitchens where it has not been cooked at least once during its season. It could be prepared solely or mixed with other green leaves like rayo (mustard green). However, those who love this saag prefer to have it alone rather than mixing it with something else. Here is a brief process of preparing the Toriko saag. 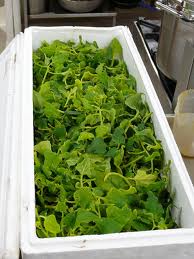 First of all, break off the root of the saag and then break the saag into two halves. Then wash it properly, at least three times or until no mud remains at the bottom of the container in which you wash the saag. If you are not careful enough, then you might end up biting mud along with your saag. After washing it, drain the water and keep the saag aside. Now, heat a pan and add oil into it. Add the thyme seed when the oil is hot. Then, break the red chili into two halves and put it in the oil. Be careful while doing so, as the chili might burst and hurling the hot oil splinter towards you. When the chilies turn golden brown, put the saag into it and add salt over it. Let it cook for few minutes and keep stirring it occasionally. It slowly starts to shed water and the saag is ready when the water dries. You could also add tomatoes if you like, however that completely depends upon your taste. This healthy saag tastes great with rice or even roti.