Nepal’s southern plains, also called the Terai, are a treasure house of cultural and pristine natural splendour. The Terai is a the rich blend of diverse languages, cultures and identities. Several languages and dialects are spoken and some communities hardly understand each other. But that has not stopped them from living in harmony with one another. 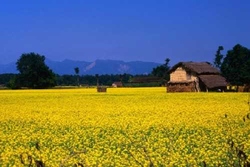 The 20 Terai districts, along the Indian border from the Mechi river in the east to Mahakali in the west, cover only 17% of the country’s total land area. But they are its economic backbone, producing 70% of Nepal’s goods and services. The bulk of Nepal’s agriculture and industry is located in this region.

Lumbini, the birthplace of Lord Buddha, is an important pilgrimage site. Thousands of Buddhist monks and the faithfuls converge on the site from all over Asia and beyond.

The famed Chitwan National Park is near Bharatpur. Several tourist resorts provide an enchanting view of Nepal in the wild. The Terai contains five out of the country’s 14 wildlife reserves. The towns of Hetauda and Birgunj have developed into industrial and commercial hubs. Janakpur is a key Hindu pilgrimage site, the parental home of Sita, Lord Ram’s consort. The shrine in Janakpur, dedicated to Sita, draws thousands of people every year during Bibah Panchami, the anniversary of their marriage.

Rajbiraj and Sindhuli are more ethnically diverse. The nearby Koshi Tappu Wildlife Reserve is a must-see for every adventure-seeker, especially bird enthusiasts. Further east is Biratnagar, an important industrial and commercial centre, which contains yet another mixture of Nepal’s ethnic variety. Biratnagar and Birtamod, the easternmost cities in the Nepalese Terai, thrive with the arts and crafts of indigenous communities, including Tharus, Rajbanshis and Dhimals.

The Terai is easily accessible from Kathmandu. Major centres like Nepalgunj, Bhairahawa, Bharatpur, Birgunj and Biratnagar are connected by air service. There are also regular bus services from Kathmandu to these destinations. The Mahendra Highway runs through the Terai, connecting most of its major urban centres.

The time of year you choose to visit the Terai makes a lot of difference. Many visitors travel there during local festivals like Holi (in March) and Chhat (in November), when the people are in a festive frenzy. The best time for a visit is between October and April, when the climate is pleasant. During the monsoon rains (June – August), roadlinks to most villages are cut off.