It has not been so long that the technologies were introduced in Nepal. Nepali market is relatively new when it comes to technological products and although it has developed significantly in short period of time, there are many parts, especially the rural areas that are still far behind when it comes to getting to see, let alone use the products and results of the technological advancement. There still are many remote areas in Nepal where people have not even seen a motor car or a bus. Modern grinders, blenders are a far cry in such areas.

Invented with the motive of making our works easier, these machines help us finish our work in less than half of the time used otherwise. Although the modern households and house wives have these facilities of using electronic blenders and grinders to grind any ingredient or item, the women in rural areas still use the traditional forms. Although it could be found no more in the cities (apart from museums or for demonstrations) these traditional grinders could be seen in some of the town areas in Nepal. These grinders are usually made up of stone, wood and metal (iron).

Some of the traditional blenders used in Nepal are mentioned below:

Silauto and Lohoro are pair of grinder commonly used to make tomato pickles or such, the Lohoro is a smooth rectangular or circular stone bar used to crush the items over the flat tray like Silauto. Usually, this is used for crushing and grinding spices like mustard seeds, ginger-garlic or making chutneys.

Jaato is a circular grinder made up of stone and a wood handle at the top to make it easier to roll it. It is mostly used to grind lentils. 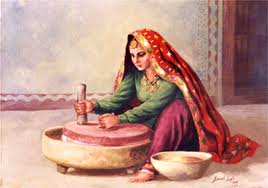 It is used mostly to beat and separate rice grains from its broken parts (Kanika). It is also used to crush and grind the whole turmeric, chilies when making them into powders. A relatively larger Khal Bachha, made of wood is used for grinding chilies into powder while, a smaller sized Khal Bachha has been introduced in the market to make crushing spices like cinnamon, cardamom etc. easier. This consists of a larger, cylindrical and slender bachha and a jar like khal, both made of iron and usually black in color.

Dhiki is a traditional grinder made up of wood. It is similar to the seesaw, in which applying force on one side will lift the other side and vice versa. One side of Dhiki has a short but strong pole attached to it at the bottom to apply pressure to the item being ground. Another side is plain and usually pressure is applied from that side with human legs. The surface where it is to be ground is also made up of wood and usually the Dhiki is placed on the earthen floor. It is used to grind rice grains.